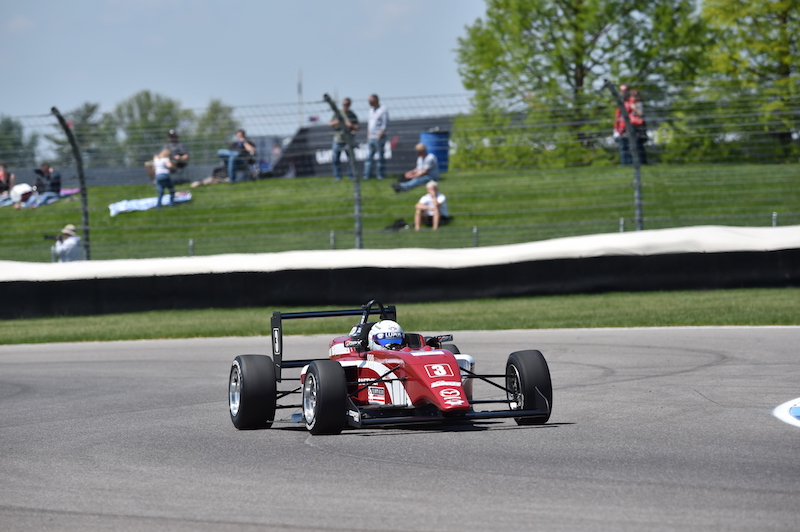 His fifth win in six races was set to be an easy one having stretched out a 4.5 second lead after the race got underway at the second attempt on lap five of 17.

Askew was however handed a?challenge with two laps to go when British F3 interloper Callan O?Keeffe stopped his Team Benik?car on the run-off road at Turn 7.

This led to a short full course yellow, sans a pace car, and it was all up to Askew to set the pace through the yellow flag period and then on the final lap restart.

He was on it straight away, preventing Rinus Veekay from using the draft?into Turn 1.

Third-placed Dakota Dickerson was not as quick on the restart and came under attack from Robert Megennis. Megennis moved alongside on the entry to Turn 1, taking the outside line that then switched to the inside line for Turn 2.

In a incident still under investigation the pair managed to touch through Turn 1, leading to Megennis understeering into Dickerson through Turn 2 and pushing them both off the road.

This promoted Kaylen Frederick to third. The Team Pelfrey driver briefly made it up to second at the beginning of the race but a grassy mistake led to him dropping down the order before fighting his way back up to fifth, which then became third, at the end of the race.

Megennis and Dickerson ended the race in seventh and 10th, a sore ending for Dickerson having looked set to take his first ever podium.

The race was bookended by cautions, with the first one running from laps one to four. This was down to a Turn 2 incident involving several backmarkers and Ricky Donison, who incredibly came from the tail end of the field to finish eighth.