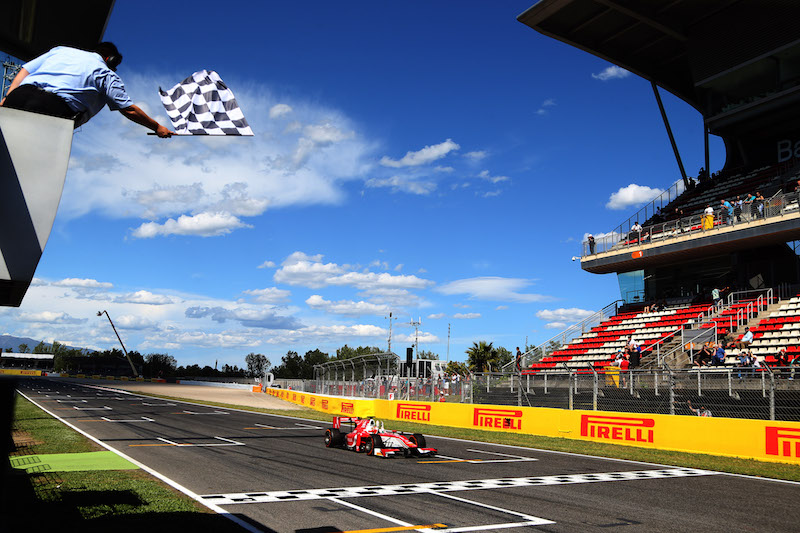 At lights out, Leclerc was able to fend off the feisty Russian Time car of Luca Ghiotto with the two battling into Turn 4, with the Italian attempting a move under braking

However, he locked up and allowed the Monegasque native Leclerc to escape and build up a comfortable lead over the next few laps.

That was as close as Ghiotto got, as he settled for second behind the Prema Powerteam car.

Oliver Rowland, on the alternate strategy expertly coxed his hard Pirelli tyres until lap 28 when he came into switch for the soft compound tyre, and began a blistering charge from seventh, taking the final podium slot from Nobuharu Matsushita with two laps remaining.

The leaders pitted early on, with Leclerc making the change to hard tyres on lap seven, a handful of laps before the safety car was deployed to allow for Sergio Canamassas’s stricken car to be recovered.

On the run to Turn 7, the Spaniard’s car conked out and he was stranded in the middle of the track, with the initial Virtual Safety Car soon upgraded to the full one.

This allowed the alternate strategy runners, Rowland, Alex Albon and Nyck de Vries the opportunity to run long, and then switch to the faster, softer rubber late on.

As de Vries fell away, Albon and Rowland engaged in a terrific dice for the lead, with the DAMS racer forcing his way past on lap 21 at Turn 7, and began to pull away, with Albon pitting five laps later.

Despite pulling away, Rowland was unable to build a significant enough gap to Leclerc, who had cleared traffic, and after the Brit pitted, the top two positions on the podium were settled for Leclerc and Ghiotto.

On much fresher rubber, Rowland’s lap times were easily quickest on circuit and made short work of Albon and Nicholas Latifi, before slotting into third with a move at Turn 1 on Matsushita’s ART.

Albon came home fifth, ahead of Latifi and Racing Engineering’s Gustav Malja, who came from 18th on the grid.

Markelov’s Russian Time had much fresher tyres and after briefly going wheel-to-wheel with King around Turn 2 and 3, the Brit out-braked himself into Turn 4 and allowed the Russian through to secure the coveted position.

Ralph Boschung?completed the points positions, with?Canamasas and Campos Racing debutant Roberto Merhi the only drivers who did not finish the race.

Merhi made contact with Antonio Fuoco, which punctured the home driver’s right-rear tyre, while?the Italian also got?a penalty for an incident with Markelov.