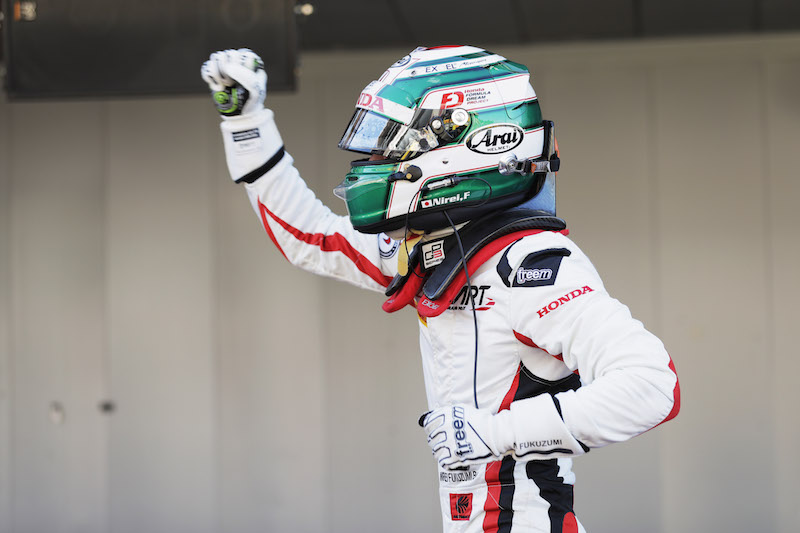 Nirei Fukuzumi claimed his first GP3 win in the opening race of the 2017 season, while?Jack Aitken was forced to?retire by a mechanical issue while pursuing his ART Grand Prix team-mate.

After taking pole, Renault academy member Aitken lost out to Honda protege Fukuzumi at the start, but was putting pressure on the Japanese driver in the second half of the race, closing to within 0.7 seconds on lap 16 of 22, when he suddenly slowed exiting Turn 5.

The Anglo-Korean driver pitted and retired at the end of the lap after falling to the back of the pack, and will face?an uphill task in race two to add to the points he scored for pole.

Aitken’s exit gifted Fukuzumi a five-second advantage, which he extended to 7.4 seconds over the remaining distance.

Italian drivers Leonardo Pulcini and Alessio Lorandi joined him on the podium, with Euroformula Open champion Pulcini taking second place on his GP3 debut after keeping the charging Lorandi behind by 0.4s at the flag.

George Russell fell back from fourth to eighth at the start but recovered those four places again before the finish with good use of GP3’s new DRS system, which was limited to a maximum of six uses by?each driver in the opening race.

Trident rookie Boccolacci had been?forced off track at Turn 2 on the opening lap when trying to challenge Aitken for second place.

Arjun Maini finished up seventh?after a mid-race revival of his old BRDC Formula 4 rivalry with Russell, ahead of an exciting battle for eighth and reverse-grid pole for race two.

Santino Ferrucci twice got on the grass trying to pass the late-signed Campos pair of Marcos Siebert and Raoul Hyman for the place in the closing laps, but Siebert lost out when he lit up his worn tyres exiting the chicane for the final time, with both Hyman and Ferrucci beating him to the line.

Red Bull Junior Niko Kari finished 15th after being forced to start from the pits having missed a call to the weighbridge in qualifying.