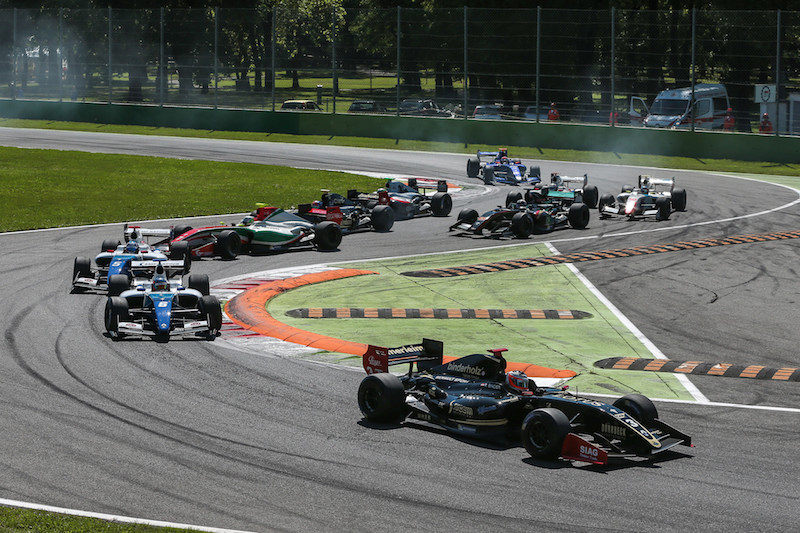 Rene Binder won in World Series Formula V8 3.5 for the first time after former team-mate Roy Nissany was penalised for cutting the chicane at the start.

For the fourth time in five races, Binder’s Lotus team-mate Pietro Fittipaldi started from pole, but as at Spa last weekend he made a poor getaway, dropping deep into the pack by the first corner and then picking up a puncture, forcing him to pit.

Fellow front-row starter Nissany appeared to have the lead secure entering the chicane for the first time, with Binder on his outside, but the Israeli driver locked up and chose to head down the escape road, rejoining ahead of Binder and the rest.

This move was soon investigated and Nissany was slapped with a five-second time penalty with less than a quarter of the 40-minute race complete.

He tried hard over the remaining distance to build the gap over Binder that he needed, but the Austrian came close to getting ahead on the road, cutting the deficit to just half a second with 10 minutes remaining when Nissany went deep at the first chicane once again.

During the first half of the race, Orudzhev got ahead of his younger team-mate but he then ran too wide at the second Lesmo, allowing Isaakyan back through.

Orudzhev’s pace trailed off badly thereafter, and he finished more than half-a-minute down on the winner in fifth place, behind Alfonso Celis who increased his championship lead – although only to two points over Binder.

Nelson Mason and Diego Menchaca finished on Orudzhev’s tail, with Mason finally passing Menchaca for sixth down the inside of the final corner after sustained pressure.

Konstantin Tereschenko was eighth and Italian gentleman Giuseppe Cipriani ninth, having flown?from 12th and last on the grid to sixth by the exit of the first chicane at the start.

Fittipaldi was still 18 seconds behind Cipriani when he pitted for a second time with a few minutes left, putting him a lap down.