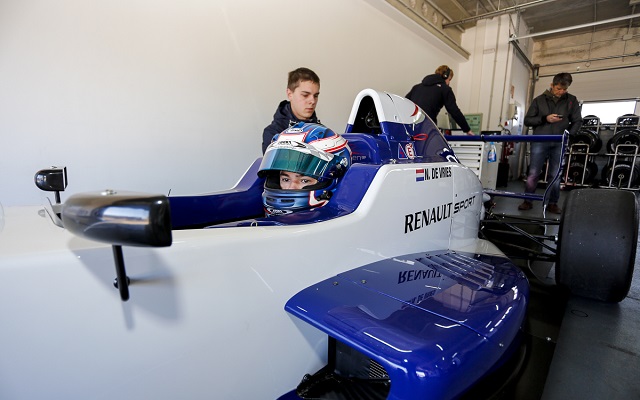 Koiranen GP’s Nyck de Vries steamrolled his opposition in Group B qualifying to pick up double pole for the Formula Renault 2.0 Alps opener at Imola.

A gradually drying track meant that Group A drivers had no chance of challenging for pole after their 30-minute run. With that said, the first part of qualifying saw complete dominance from Prema’s Bruno Bonifacio, who took over at the top early on and would prove to be completely untouchable for his competitors.

With Bonifacio in control, the rest of the field were mostly fighting for the second row, which eventually went to NEC runner-up Jack Aitken. The Briton narrowly beat out his teammate Seb Morris, while Dennis Olsen and Formula Renault rookie George Russell completed the top five.

While track conditions seemed to remain somewhat static for Group A, they began to improve dramatically throughout Group B qualifying. Bonifacio’s benchmark was toppled almost right away by Fortec’s Matt Parry, but it was de Vries who proved to be the quickest in getting on top of the conditions.

The Dutchman went on slicks in the closing minutes of the session and began shaving off close to a second with each consecutive lap, eventually settling in two seconds ahead of nearest rival Hans Villemi when the red flag came out to end the session early.

De Vries also secured pole for race two on second-best times, with Bonifacio again joining him on the front row. The duo famously came together for the lead in the second race of last season’s opener at Vallelunga.