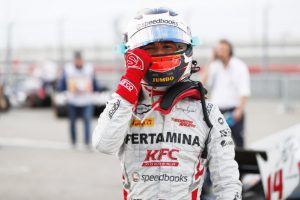 Nyck de Vries took his second Formula 2 pole of the season at Sochi, beating fellow McLaren junior Lando Norris by almost a quarter of a second.

DAMS duo Nicholas Latifi and Alexander Albon were fourth and fifth, with Latifi being the last of the drivers to get within half a second of de Vries.

GP3 regular Niko Kari qualified 16th on his F2 debut with MP Motorsport, three spots ahead of Artem Markelov, who was effectively slowest at his home event, ahead only of Arjun Maini who spun and stalled before setting a competitive time.