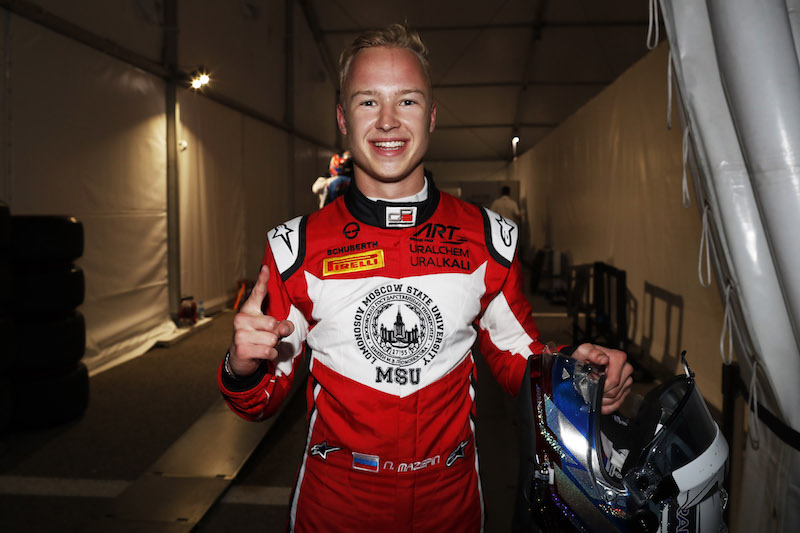 Mazepin’s championship leading team-mate Anthoine Hubert was on top for most of qualifying, before Mazepin started threatening him with quick laps in the final 10 minutes as visibility decreased. In the final run he improved on his best time, as Hubert slipped down to fifth.

Pulcini’s second place came off a brilliant first sector, which incorporates the 180? Turn 4, an he ended up just 0.017 seconds off Mazepin, who twice went wide and off track during his final lap.

Callum Ilott led the second row of the grid for ART, with Giuliano Alesi putting in a late lap for Trident to take fourth. All four drivers were covered by less than a tenth of a second, with a second bunch of cars fighting over fifth to eighth positions.

Hubert led that group, ahead of Alesi’s team-mate Ryan Tveter, Campos Racing’s Simo Laaksonen and MP Motorsport’s Richard Verschoor. Joey Mawson and Jake Hughes completed the top 10 for Arden and ART, the latter being pushed back after going wide at Turn 3 and aborting his last lap.

Renault F1 junior Sacha Fenestraz qualified 13th on his championship debut, less than a second off the pace.

David Beckmann, who took pole and race one victory in the previous two rounds at Spa and Monza, came to a halt late on with smoke pouring from his car. He ended up 15th.