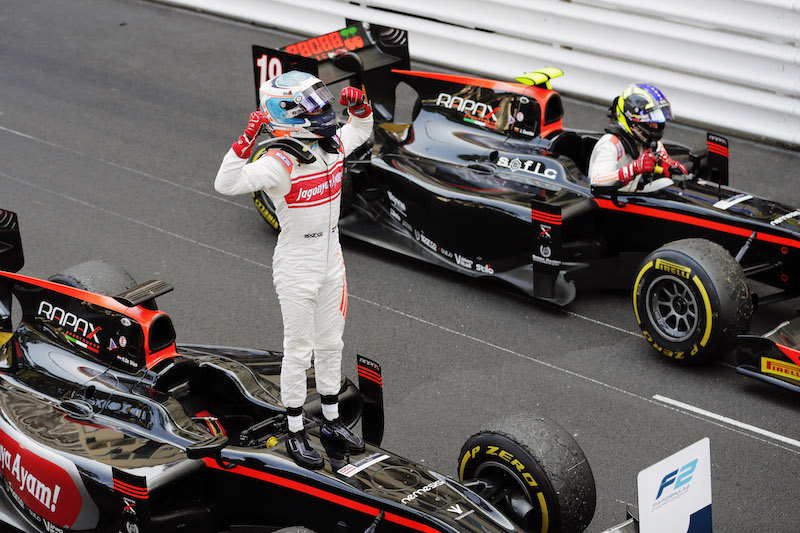 Rookie Nyck de Vries beat his veteran team-mate Johnny Cecotto off the line to set up a dominant maiden Formula 2 victory in the Monaco sprint race.

The McLaren junior driver passed the wheel-spinning pole-sitter Cecotto on the run to the first corner Ste Devote, and opened up a 1.5-second advantage over the similarly Rapax-run car on the opening lap.

The Dutch GP3 graduate struggled with tyre wear from strong qualifying performances in Bahrain and Barcelona but had no such issues with race pace on this occasion, extending his advantage?from 2.5 to 8.5 seconds in an eight-lap spell in the middle of the 30-lap race.

De Vries grew his lead to more than 11s near the end and took the chequered flag 9.8s clear after slowing to celebrate at the line.

Gustav Malja converted third on the grid into his first podium of the season, just half a second behind Cecotto – who complained of?a differential problem – and four tenths of a second in front of Luca Ghiotto.

Artem Markelov was one driver making progress within the points positions, taking sixth away from Nobuharu Matsushita off the line and managing to pass the other ART Grand Prix car of Alex Albon on the inside of Rascasse at two-thirds distance.

The Russian Time driver then put pressure on his team-mate Ghiotto but ultimately had to settle for fifth.

Jordan King got the final point on offer in eighth after passing?feature race winner Oliver Rowland, who was hit from behind with three laps to go by Sergio Canamasas.

Spanish veteran Canamasas had passed Antonio Fuoco for 10th at Rascasse earlier on but wasn’t even close to repeating that move on Rowland when he hit the DAMS driver at the same corner.

While the Trident driver was forced to pit with front-end damage, Rowland was able to continue, and although he dropped around five seconds a lap to King, he did just pip Fuoco to ninth.

After his feature-race heartbreak, Charles Leclerc put in a battling drive down the order, at one point making contact with Norman Nato at Rascasse that forced the Frenchman to retire and led to a 10-second time penalty.

Once again Leclerc ended his race early in the pits after appearing to have suffered steering damage.