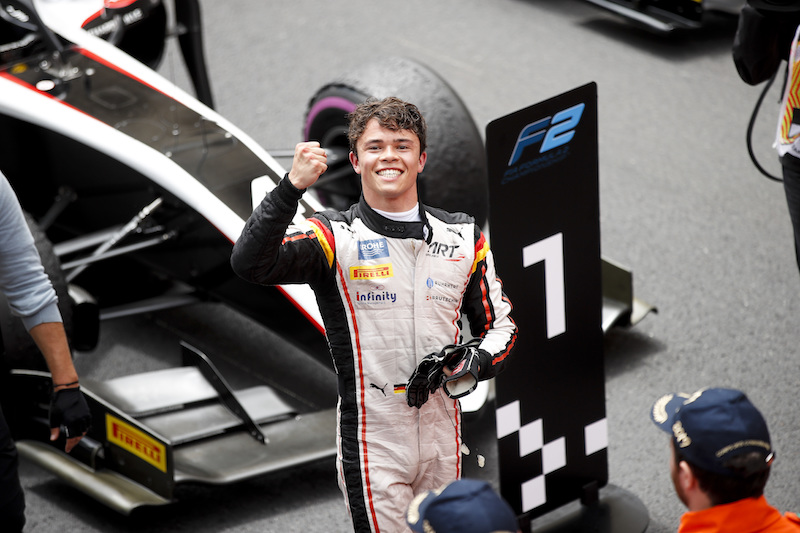 Nyck de Vries took a dominant win in the Formula 2 feature race at Monaco, which was overshadowed by a red flag incident that left half of the field a lap down.

De Vries controlled the race from the front until the red flag was brought out for an incident between European Formula 3 champion Mick Schumacher and Arden’s Tatiana Calderon.

Drivers were able to change their tyres under the red flag, but the 11 drivers caught up in the aftermath of the Schumacher/Calderon’s went a lap down. Schumacher was handed a drive-through penalty for the incident, and also picked up a separate five-second penalty for leaving the track and gaining an advantage.

De Vries and the rest of the top eight still had to make their mandatory pitstops but were able to do so and rejoin ahead of the lapped runners.

He made a failed move on Schumacher at the hairpin, which meant he had to make an extra stop. Then after the red flag, he punted Schumacher’s team-mate Gelael and earned himself a drive-through penalty, eventually finishing down in 13th.

Nobuharu Matsushita went from ninth on the grid to secure the final place on the podium – his first since returning to the series at the start of the year.

DAMS’ Sergio Sette Camara occupied third for the majority of the race but lost out to Matsushita in the pitstops, and was forced to settle for fourth place, with Dorian Boccolacci recovering well from his qualifying crash to complete the top five for Campos Racing.

Guanyu Zhou went from 16th to sixth place, ahead of Artem Markelov, who is making a one-off appearance, in place of Jordan King while the Brit competes in the Indy500.

Louis Deletraz took reverse-grid pole as the leading driver who was put a lap down under the red flag, having pressured Juan Manuel Correa (then running seventh) into a late crash.

Deletraz was followed by?Anthoine Hubert and Ralph Boschung, who sealed the final point ahead of Nikita Mazepin and Schumacher.

Boschung and Markelov, along with Calderon, were all given five-second penalties for leaving the track at the first corner and gaining an advantage.

Front-row qualifier Callum Ilott was the first casualty of the race when he suffered an electrical issue on the grid following the formation lap, which caused an aborted start and eliminating him from the race.

Jack Aitken’s miserable weekend continued. Having been blocked by?Mahaveer Raghunathan in qualifying, he lost heaps of time stuck behind the Indian in the first part of the race before being punted out of the race by the MP Motorsport driver, who was a lap down, with just a couple of laps to go.

A slew of incidents are currently under investigation including the entire red flag situation.