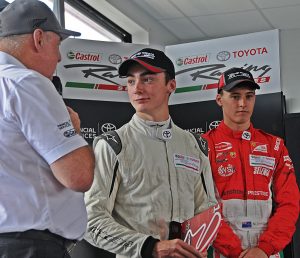 Clement Novalak claimed his second Toyota Racing Series win of the season in the reversed grid race at Hampton Downs, despite the interruption of a red flag.

Novolak pulled out a small gap on the opening lap as Harker dropped to the bottom end of the top 10. M2 Competition’s Juan Manuel Correa moved into second, having also jumped team-mate and championship contender Robert Shwartzman off the line.

The race was neutralised on the second lap when Cameron Das and Charles Milesi collided, sending Milesi into the wall and causing Das to stop with damage to the front of his car. A safety car was briefly brought out before the red flags were waved.

On the restart Novalak and Correa made strong getaways, while Shwartzman kept championship leading team-mate Marcus Armstrong behind him to retain third. There was no change in the order from then on, and Novalak finished 0.376 seconds clear of Correa to take the second win of his car racing career.

Further back, race one winner Richard Verschoor was looking for a way past Pull for fifth. A small mistake by Pull granted the Dutchman the perfect opportunity and he was able to get alongside the Brit. The pair ran side-by-side for a number of corners before Verschoor managed to take the inside line, snatching the position.

Pull was left to battle with TRS veterans Brendon Leitch and Taylor Cockerton in the closing stages of the race. The trio ran closely to the chequered flag, with Pull managing to keep sixth ahead of Leitch and Cockerton. The positions were reversed though when Pull was penalised too, handing Leitch sixth place and demoting Pull to seventh.

After the difficult start, Harker finished ninth, with Ryan Yardley rounding out the top 10. NACAM F4 champion Calvin Ming finished 11th and a lap down after having to pit to change his nose.

The winner of the final race of this weekend’s action will also receive the NZ Motor Cup, which has previously been won in its current guise by Enaam Ahmed and Mitch Evans. Verschoor is set to start from pole, with Armstrong alongside him on the front row.