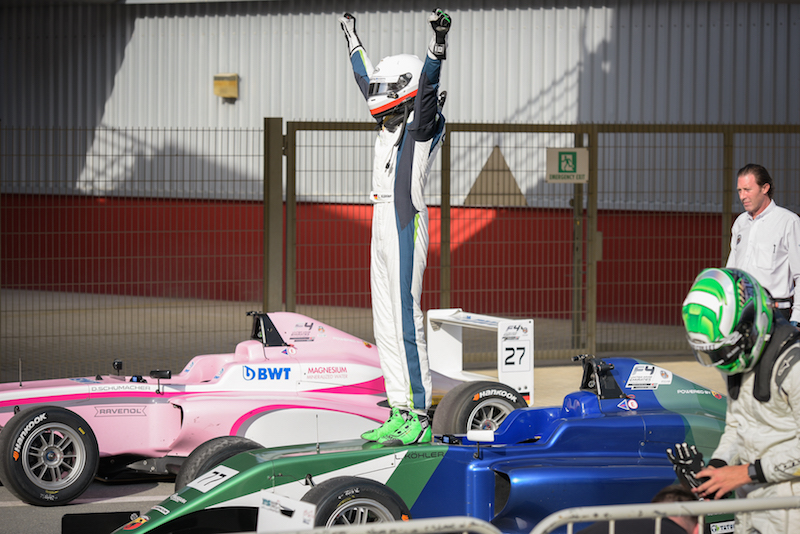 German Leon Kohler won two of the three races at Dubai Autodrome in the third round of the 2017-18 Formula 4 UAE season, his first weekend in car racing, with David Schumacher winning the other.

Schumacher took pole at his first attempt at Yas Marina last weekend, and followed that up by taking both poles at Dubai for Rasgaria with US Racing. Championship leader Charles Weerts (Rasgaria with US Racing) lined up second for the first race, almost three tenths back, with Schumacher’s team-mate and car racing rookie Kohler and Cram Motorsport’s Tom Beckhauser filling the second row.

Having missed out on a debut victory last time out, Schumacher looked set to put that right in the first race as he and Weerts pulled away from the rest of the field.

His victory aspirations didn’t last though, as contact with Weerts, which put the Belgian out of the race, led to Schumacher dropping back and conceding to victory to 2017 CIK-FIA European KZ2 champion Kohler, who was contesting his first ever car race.

Although Schumacher missed out, the result still provided Rasgaria with its first win of the season, and a first podium for Nicolas Todt protege Caio Collet, also in his first race in cars.

Petersson, Weerts’ closest rival in the championship, started on pole for the reversed grid race two, with the championship leader starting from the pits as a penalty for his race one crash.

The Swede held onto the lead off the line, but a rapid start by Schumacher meant that the German was in the lead when Petersson outbraked himself halfway through the first lap.

Schumacher held on to win, with Collet improving on his race one performance to take second. Beckhauser took the final podium spot, and second in the standings in the process.

A clash between Moretti and Roy put both out of the race, and they were joined on the sidelines by Petersson. This helped Weerts’ rise to fifth place, just behind Amaury Cordeel.

Weerts was back on the front row for the final race of the weekend, and found himself in the lead after pole-man Schumacher stalled at the start and fell to the rear of the field. A collision between Taoufik and Roy brought out the safety car, helping Schumacher’s cause, and the German started to hunt down Weerts and Kohler, who were battling for the lead.

Kohler eventually passed Weerts for the lead, with the Belgian then making contact with Schumacher, sending the German off track and back down the order.

Weerts kept on pressuring Kohler, and ended the race half a second behind the car racing rookie. A 10-second penalty was then handed to the second-place man for overtaking under the safety car, dropping him to seventh and elevating Beckhauser and Cordeel to second and third.

A messy weekend for the Dragon with Motopark driver means he now only leads the championship by three points over Cram’s Beckhauser, with Petersson 20 points back in third. Schumacher has passed the absent Olli Caldwell for fourth, while debutants Kohler and Collet have already slipped into eighth and ninth in the standings.

The championship returns to the Yas Marina Circuit for the fourth round of the championship in a weekend’s time, marking the end of three consecutive weekends of competition.