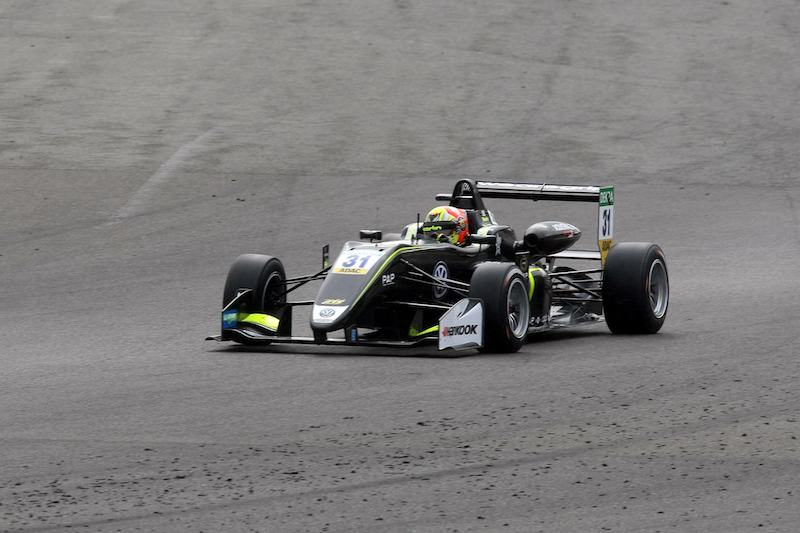 Lando Norris began his first full season in the Formula 3 European Championship with victory at Silverstone, as prospective title rival Callum Ilott spun out behind him.

Light rain before the start of the race led to it starting with two laps behind the safety car ? despite the fact all cars were on slick tyres ? and there was only just over one lap of green-flag racing before it returned after Ilott spun on the damp track at Abbey and into the gravel trap.

At the restart, it only took until Luffield for another incident to trigger a safety car when Ralf Aron tripped over the front-left wheel of the car in front of him and was sent off into the tyre barrier on the outside.

There, the Estonian could chat with Hitech team-mate Nikita Mazepin, who had an eventful first racing lap end there after twice tangling with Van Amersfoort Racing cars ? the first being contact with Joey Mawson at the final corner at the green flag that sent him spinning around.

Norris had managed to build a three-second gap over charging Carlin team-mate Jake Dennis in that previous green-flag lap, but quickly pulled away again at the restart with a series of fastest laps to build a lead of over two seconds.

He eased off on the final lap to finish 1.6s ahead of Dennis, who had to fend off Maximilian Gunther near the end. An incident with the German driver when he passed him on the first racing lap is to be investigated.

Joel Eriksson went side-by-side with Gunther at the final restart but had to settle for fourth ahead of an impressive Mawson, who fended off attention from former ADAC Formula 4 rival Mick Schumacher at the last restart.

Schumacher then found himself passed by another former VAR F4 team-mate and MRF Challenge rival Harrison Newey, and Prema team-mate Guan Yu Zhou also found a way past for seventh into Vale at the end of the penultimate lap.

Pedro Piquet and Jehan Daruvala capitalised on this action ahead to deny Tadasuke Makino points on his debut race in Europe.