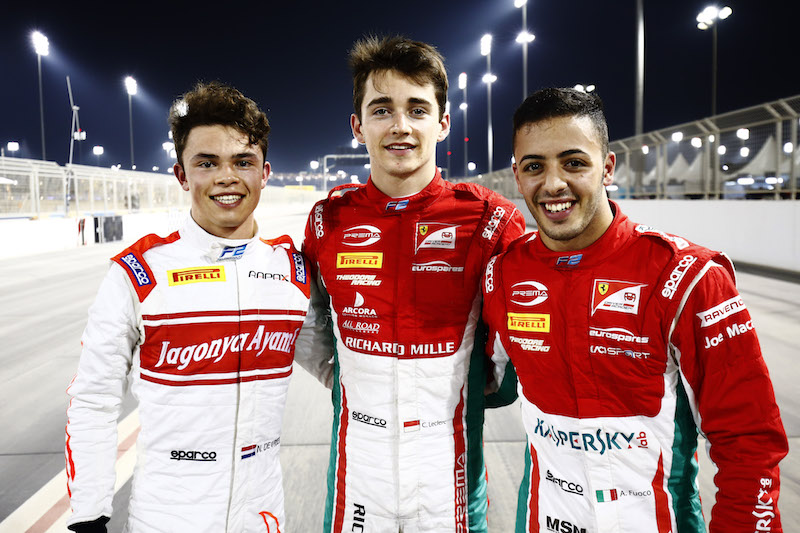 Prema Racing’s Charles Leclerc has claimed Formula 2 pole position in his debut?qualifying session at round one in Bahrain.

Last year’s GP3 champion set an impressive lap time of 1m38.907s while the track was quiet with 10 minutes to go to lead team-mate Antonio Fuoco by 0.678 seconds.

This is Prema’s fifth straight pole in either GP2 or F2 and the first time that both of its cars are set to start on the front row of the grid since last season’s penultimate GP2 feature race in Malaysia.

The Monegasque driver stepped out of his car with five minutes of the session remaining and the chances of anyone improving was taken away with just under two minutes to go.

Malja appeared to be driving slowly on the apex of the corner as Jeffri came up much faster behind him, with the Malaysian colliding with the left-hand side of the Swede’s car. The Racing Engineering car came to a halt on the right-hand side of the track, while the Trident machine was left backwards in the run-off area.

Rapax’s Nyck de Vries was the only late improver, moving up to third after a dramatic start to his session which saw him stall while in the queue of cars fighting for position out of the pitlane when it opened. Norman Nato was fourth fastest, claiming Arden’s first top-10 qualifying position since?Jeffri finished eighth in qualifying in Italy in GP2 last year.

Russian Time’s Luca Ghiotto finished fifth ahead of ART Grand Prix’s Nobuharu Matsushita and team-mate Artem Markelov. Highly-fancied?DAMS driver Oliver Rowland could only finish in eighth position after locking up the tyres on the right-hand side of his car on his final lap.