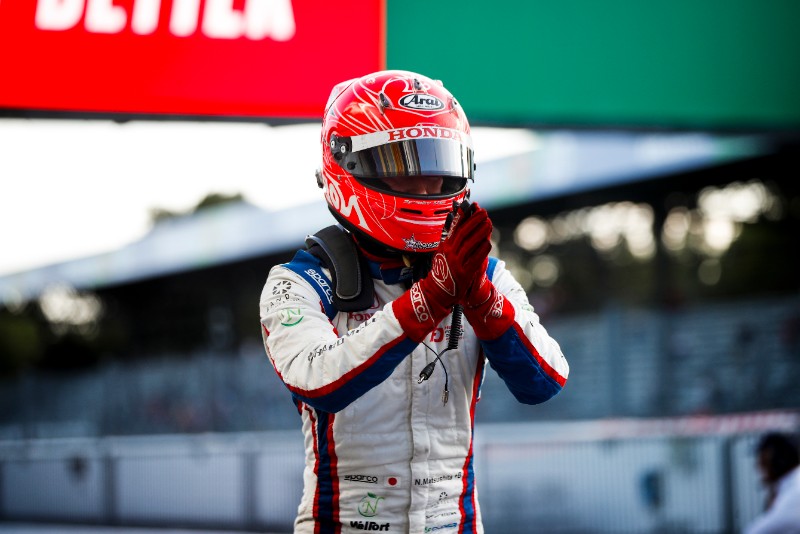 Carlin?s Nobuharu Matsushita came from fifth on the grid to win the Formula 2 feature race at Monza.

Matsushita made a stellar start, muscling his way up to third by the end of the opening lap. Virtuosi Racing?s Guanyu Zhou was then easy pickings, before he rapidly closed in on poleman Callum Ilott.

He passed the Sauber Junior Team by Charouz driver during the pitstop phase of the race, with both drivers opting for the conventional soft-medium tyre strategy.

From there, he was able to resist all pressure from Ilott, despite losing a turning vane late in the race. He gave his Italian race engineer Daniele Rossi his third Monza feature race win in four years after previous victories with Antonio Giovinazzi and Antonio Fuoco at Prema.

As Ilott?s tyres faded, it was Zhou’s team-mate Luca Ghiotto who came through from 13th on the grid on the alternate strategy to finish second.

Ghiotto charged through the pack, helped by an excellent opening handful of laps, and finished just 5.7 seconds from the winner despite a slow pitstop. He emerged in seventh after his stop but made easy work of every driver in his way.

Championship leader Nyck de Vries started last after being excluded from qualifying, but methodically worked his way through the pack to take the final podium spot, despite a scary moment as he was forced wide early in the race.

After a hard week for the Charouz team, Ilott secured his best feature race result of fourth ? ahead of a penalised Sergio Sette Camara, who was punished for running wide while battling de Vries.

Sette Camara’s DAMS team-mate Nicholas Latifi had his title chances severely harmed after contact at the Della Roggia chicane with Zhou, damaging his own front wing and giving the latter with a puncture.

Sean Gelael returned to the points for Prema in ninth, with King’s team-mate Mahaveer Raghunathan taking a surprise 10th place.

The sole Arden car of Tatiana Calderon retired after a spin in the middle of the race, while Mick Schumacher suffered from reliability problems and retired on the last lap.