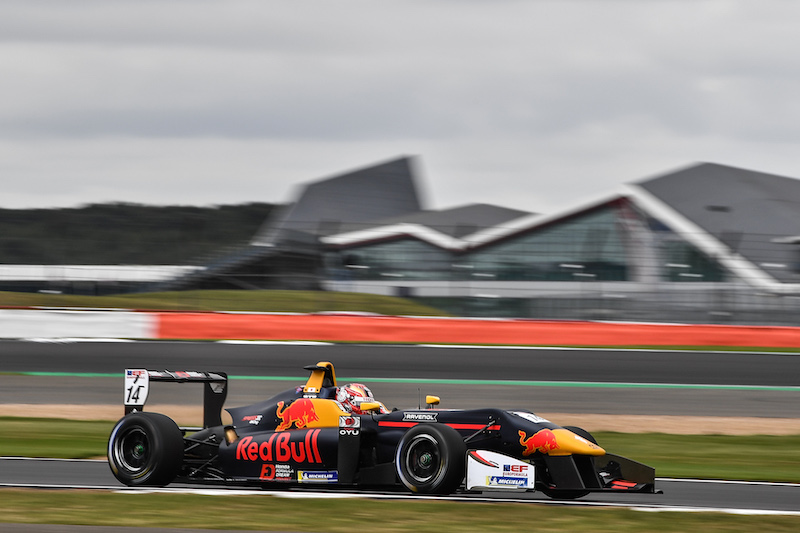 Honda junior Toshiki Oyu dominated the opening Euroformula Open race at Silverstone in Red Bull colours, his first ever race in the championship.

The Japanese Formula 3 regular, taking over Red Bull junior Yuki Tsunoda’s car at Motopark, started the race from pole and immediately pulled away into a 1.622 second lead after the first lap.

That had grown by a second by the next lap, and, although he eventually had fastest lap taken from him by team-mate Enaam Ahmed, Oyu was untouchable on the way to a 4.585s victory.

Japanese F3 rival Enaam Ahmed started and finished the race in second, spending a decent period of the race with Carlin’s Nicolai Kjaergaard in his mirrors. He was able to break away from the Dane late on, setting fastest lap on the way.

At the start of the race, Billy Monger had beaten Kjaergaard off the line to snatch third place. It took a while for Kjaergaard to return to the podium, but he quickly pulled away from his British team-mate.

Oyu and the two Carlin drivers also filled the rookie podium thanks to Monger finishing fourth, enabling the double amputee to do his famous leggy – drinking the podium champagne from his prosphetic leg.

Lukas Dunner, the closest driver to absent championship leader Marino Sato in the standings, had a nightmare race.

After difficulties in practice and an engine change, the Teo Martin Motorsport driver then clattered over a sausage kerb on the opening lap and crashed into Fortec’s new driver Manuel Maldonado. His race ended on the spot, while Maldonado had a nose change and finished a distant 12th.