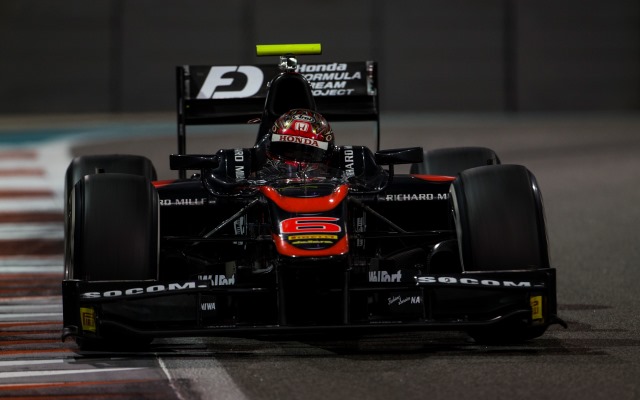 Nobuharu Matsushita was quickest again for ART Grand Prix in the evening session on day one of GP2 post-season testing in Abu Dhabi.

DAMS tester Nicholas Latifi had occupied top spot before Matsushita went over half a second clear inside the final hour under the lights at Yas Marina.

The Honda protege, who finished ninth in the GP2 standings in his rookie season in Europe, was over a second quicker than he had gone when he topped the morning session.

Latifi held on to second place ahead of the man whose car he’s driving this week, Pierre Gasly, who gave the Prema team third on its first day in GP2.

Like his team-mate for the day Matsushita, Oliver Rowland repeated his fourth place from the morning, within 36 thousandths of second place.

Carlin drivers Richie Stanaway and Dean Stoneman were closely matched in eighth and ninth with Andre Negrao 10th for Rapax.

Matsushita will step aside on Thursday as Nato and Marlon Stockinger test for ART, with Rowland heading with Rosenqvist to Prema and Gasly switching to Russian Time.

Ghiotto will sample Racing Engineering in place of Sergey Sirotkin who returns to Rapax, with Ghiotto’s GP3 team-mate Artur Janosz to make his GP2 bow for Trident alongside Zoel Amberg, returning after health issues ruled him out during 2015.

Two drivers will arrive at the test fresh from trying Audi DTM machinery at Jerez: Mitch Evans teams up with Sean Gelael at Campos in the team’s expected 2016 line-up, while Antonio Giovinazzi will take over from Stanaway at Carlin for the evening running.