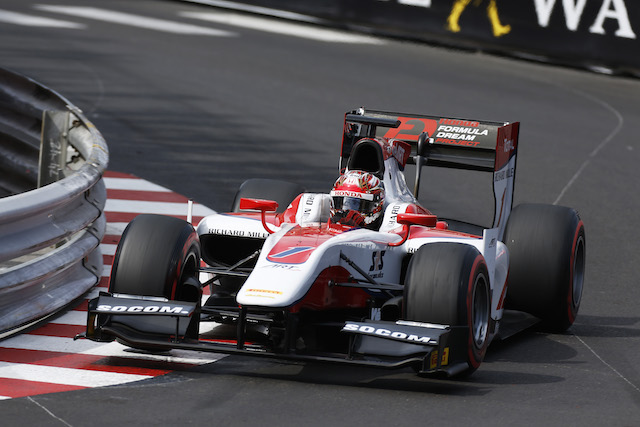 The Honda protege was promoted onto the reverse-grid pole when?Antonio Giovinazzi?was demoted from seventh to 11th in the feature race results for cutting the chicane.

Matsushita?suffered a pretty poor initial launch, with fellow front-row starter?Marvin Kirchhofer able to pull alongside him, but the Japanese ace stayed ahead on the inside line and then began pulling away.

He finished up 13.6 seconds clear, setting the fastest lap on lap 28 of 30. It’s a second GP2 win for Matsushita but comes after he failed to finish higher than eighth in the first three races of his second?season.

Kirchhofer kept?Raffaele Marciello behind him to finish second in just his second weekend in?GP2?and first ever in Monaco.

Nato’s finish two places ahead of Markelov puts him into the standings lead.

Matsushita’s team-mate?Sergey Sirotkin remains yet to score in 2016 after a third retirement in four races, slowing to a halt at Casino Square.

Indonesian drivers?Philo Paz Armand and?Sean Gelael?both found the barriers, the latter sliding wide at Ste Devote and the former left with nowhere to go when being passed at the hairpin by?Jordan King, who was handed a 10-second penalty for the move.