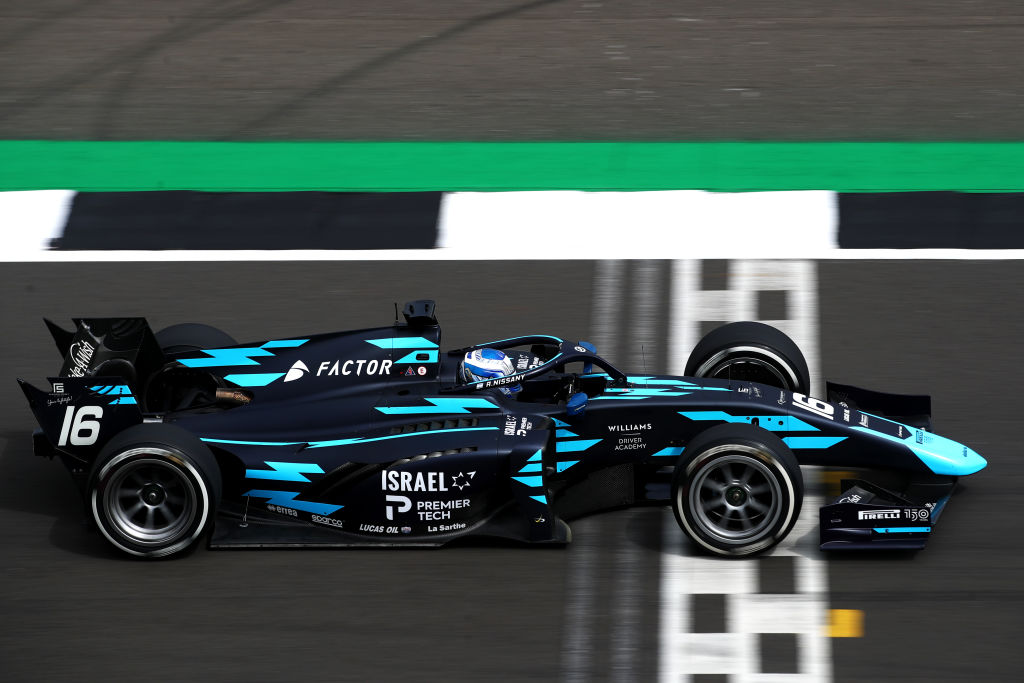 Williams junior Roy Nissany has been given a five-place grid penalty and three penalty points for his collision with Dennis Hauger in Formula 2’s Silverstone feature race.

Nissany and Hauger were battling on lap one when the DAMS driver forced the Prema driver off track on the approach to Vale. Hauger was sent over the sausage kerbs at the next corner and hit Nissany’s car from above as Nissany made the turn.

They were both sent into the gravel, with Hauger landing on Nissany’s halo. But both were able to walk away from the crash.

During the race a 10-second stop-go penalty was handed out to Van Amersfoort Racing’s David Beckmann due to a mechanic being next to the car on the grid when the 15s signal was given to clear the area. After taking his penalty he set the fastest lap, but won’t earn points from it as he finished at the back of the field. He also recieves two penalty points for the team error.

Earlier in the weekend Charouz Racing System was fined €7500 for using the plank allocated to Cem Bolukbasi’s car on Enzo Fittipaldi’s, with Fittipaldi now having two less to use through the season as a result, and Hitech GP’s Juri Vips was handed a five-second penalty in the sprint race for track limits abuse and dropped from 10th to 12th in the race result.

The supporting FIA Formula 3 Championship had even more penalties, starting with two instances of Carlin’s Brad Benavides speeding in the pitlane during free pracrice. He was fined €2300 for the two offences, and was then reprimanded for ignoring the red light at pit exit.

Pepe Marti and Franco Colapinto got reprimands for track limits abuse, while Isack Hadjar did his practice start in the wrong place and got a suspended grid penalty.

Benavides was in trouble again in qualifying, getting fined €1000 along with team-mate Zak O’Sullivan for not entering the support race pitlane at the end of the session, then ahead of Saturday’s sprint race the route from that pitlane to Formula 1’s one was where Trident was fined €1000 for leaving radiator inlet covers on Zane Maloney’s car.

Laszlo Toth (Charouz), Rafael Villagomez (VAR) and Zdenek Chovanec (Charouz) were penalised 5s each and handed a penalty point in the sprint race for lining up incorrectly at the back of the grid, then retiree Chovanec got two three-place grid penalties and four penalty points for two collisions with Toth.

Benavides was back in the stewards’ room on Sunday, getting a 5s penalty for track limits abuse, with MP Motorsport’s Kush Maini punished for the same offence.

In W Series, Nerea Marti had a two-place grid penalty for ignoring the red light at pit exit, and Emely de Heus had an approved engine and gearbox change after Friday’s action.