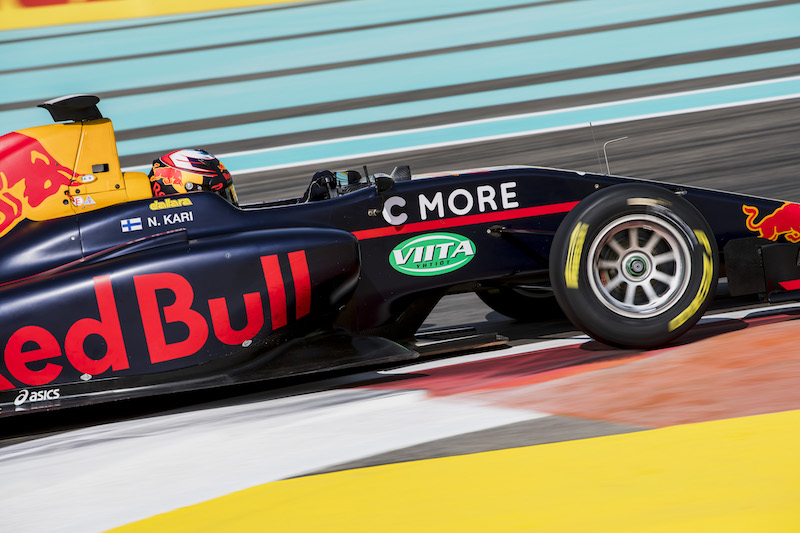 Niko Kari used a sensational start to take his first GP3 win in the opening race in Abu Dhabi on what is set to be his last weekend as a Red Bull Junior.

The Finn, who was informed by Helmut Marko over the summer that he would not be retained into next season, started the race from third on the grid.

As pole-sitter George Russell moved to the inside to cover off a faster-starting Leonardo Pulcini, Kari swept around the outside of both of them into Turn 1.

The Arden driver stayed ahead through two virtual safety car periods and eventually won by 2.7 seconds, becoming the first driver from outside ART Grand Prix to win the first race of a weekend this season.

Pulcini was on course to make it an Arden one-two after passing Russell around the outside of Turn 11 on the opening lap.

At the first VSC he was caught by Russell, who tried to dive down the inside of the penultimate corner at the restart but was squeezed up onto the kerb and bounced wide.

On the second restart, Russell simply drove past Pulcini before the final corner to secure second place.

Pulcini fell into the clutches of Arjun Maini on the penultimate lap, and as he was being overtaken down the back straight his left-rear tyre let go.

Maini made the podium from fifth on the grid after getting ahead of Macau Grand Prix winner Dan Ticktum at the start.

Ticktum fell behind Dorian Boccolacci at the first restart, but got the place back a couple of laps later with a fine wheel-banging move around the outside of Turn 11.

Boccolacci spent much of the remaining distance in an entertaining duel with Alessio Lorandi, who came from 10th on the grid to finish fifth.

Steijn Schothorst also cleared Boccolacci to take sixth, while Anthoine Hubert recovered from a brief technical problem that slowed him down the back straight to grab eighth place and reversed grid pole for the final race of the season, presenting him with a golden opportunity to break his win duck.

A race two win could allow Hubert to take third in the championship at the expense of Nirei Fukuzumi, who lined up for the race with the chance to take second away from Jack Aitken but stalled from sixth on the grid.

After getting going, Fukuzumi ran into the back of another car at Turn 9 and was forced to pit for a new front wing, leaving him to finish 15th, one place behind Aitken who was unable to make progress from his lowly grid position.