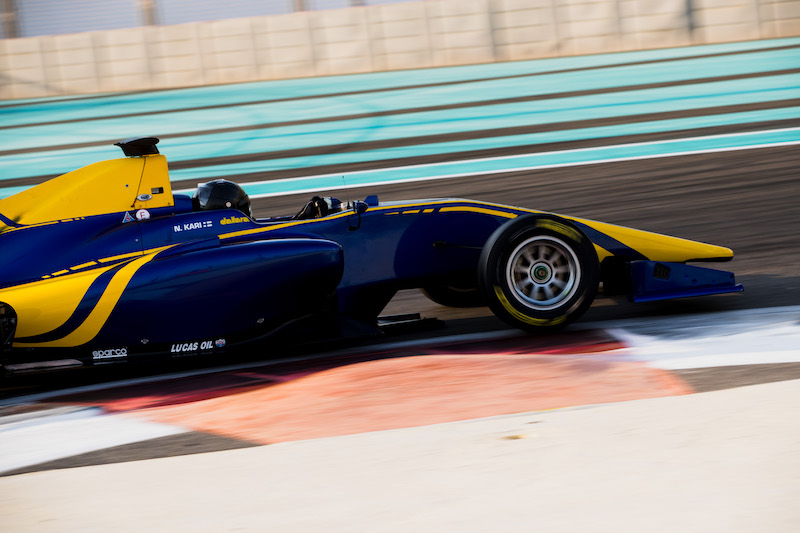 Niko Kari was fastest again on the second day of the GP3 post-season test in Abu Dhabi ahead of his former team-mate Leonardo Pulcini.

Driving for MP Motorsport as the Dutch outfit takes over the three cars run this year by DAMS, Kari set the day’s best time of 1m54.733s with around an hour of the morning session remaining.

The time was 0.227 seconds faster than the benchmark set on Thursday by the Finn, who switched during the day from his Red Bull-branded helmet to a plain black one (pictured) amidst his expected release from the company’s backing.

His former Arden team-mate Leonardo Pulcini was second in the morning session for Campos Racing, 0.387s adrift, and then topped the afternoon with a faster?1m55.210s lap.

On Saturday, Pulcini will sample Formula 2 with Campos – the team with which he claimed the 2016 Euroformula Open title – and Kari will take his place.

The quickest debutant from day one Callum Ilott was second to Pulcini in the afternoon for ART Grand Prix, but he was beaten to fastest rookie honours by Pedro Piquet, who had come fourth in the morning between Trident team-mates Giuliano Alesi and Alessio Lorandi.

Jehan Daruvala was sixth in the morning for Arden in front of fellow F3 racers Ilott, David Beckmann (Jenzer) and Jake Hughes (ART Grand Prix) with Formula Renault graduate Gabriel Aubry again in the top 10 in 10th after joining ART.

In the afternoon, Pulcini and Ilott were followed by Nikita Mazepin (ART), Alesi, Kari, Lorandi, Piquet and Daruvala.

Beckmann was ninth ahead of a switch to Arden, where he will be joined by former Trident racer Dorian Boccolacci and Julien Falchero, who has been testing Arden’s F2 car on Friday.

The inseparable Daruvala and Ferdinand Habsburg will both move from Arden to MP with Tatiana Calderon taking over Beckmann’s Jenzer car.