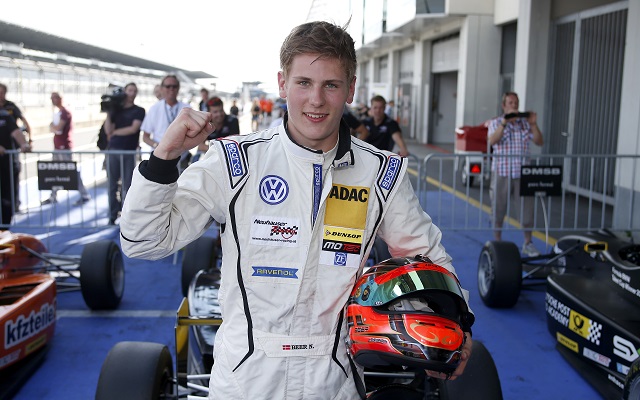 The 17-year-old Dane made his single-seater debut in 2012 after a solid career in karting and would finish 16th in ADAC Formel Masters after a part-time campaign, having also secured two victories on his limited appearance in Formula Ford Denmark.

He switched to frontrunner ADAC Formel Masters squad Neuhauser for a full-time assault in 2013. With the championship dominated by Mucke’s Alessio Picariello, Beer was among the best of the rest, scoring points in all but three races and finishing fourth in the standings with two victories to his name.

“I’m really happy to be joining SWR for my first season in BRDC Formula 4, I can?t wait for the season to start?, stated Beer. ?Last year was very strong, I had some wins and a lot of podiums and I want to be fighting like that in F4 as soon as I can. The guys at SWR run a fantastic team and I know they?re going to give me a great car. Even though I don?t know the UK circuits, I?m confident we?ll do well.”

The Dane’s confirmation follows the announcement of karting graduate Diego Borrelli as part of SWR’s BRDC F4 lineup one day earlier. The team is expected to field three cars in the series for 2014, albeit, according to the official website of the championship, they still do not have a driver signed.

“We?re delighted Nicolas has signed for the team this year”, said team owner Sean Walkinshaw. “He?s a very talented driver and has already got some good experience in Formula Ford and the ADAC Formel Masters. He?s proven himself as a race winner and we?re sure he?s going to be a very competitive driver in Formula 4. We?ve really got the makings of a very strong young team for the new season, I?m sure Nicolas and Diego will be consistent front-runners.”

The class of 2014: The drivers set to shine this year