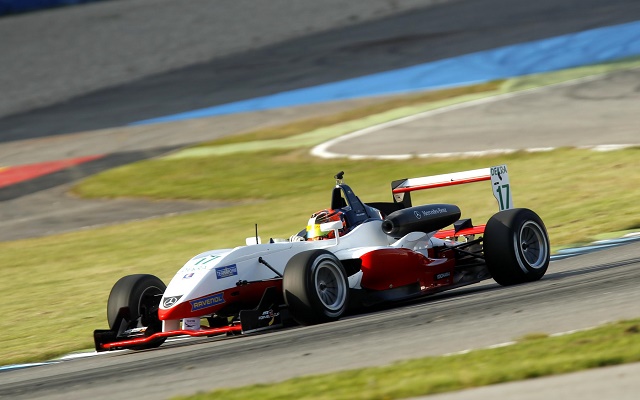 Danish racer Nicolas Beer will move on to German F3 in 2015, joining Italian squad EuroInternational, the team have announced.

Beer, 18, made his debut in the series in last year’s Hockenheim finale, entering as EuroInternational’s guest driver. He retired from the opening race, but fought his way up to fifth from the back in the reverse-grid outing before claiming sixth in the final race.

He was without a drive for much of 2014 after parting ways with Sean Walkinshaw Racing four rounds into the BRDC F4 season.

Prior to that, he contested a year and a half in ADAC Formel Masters, winning races at the Nurburgring and Hockenheim to finish fourth in 2013.

“We have run Nico in the last event of the 2014 ATS Formel 3 Championship without any test during the season and achieved very positive results,” stated team boss Antonio Ferrari. “With today’s announcement, Nico will be able to test and plan in the best way possible the new season to win the 2015 German Formula Open title.”

2015 will mark EuroInternational’s full-time return to the German F3 scene after they contested only three rounds of the 2014 schedule.

EuroInternational’s announcement appears to suggest that German F3 will be following in the footsteps of Euroformula Open (formerly known as European F3 Open) and dropping the ‘F3’ part of their moniker.

EF Open’s original decision stemmed from the FIA’s warning against the use of the F3 name in championships that did not conform to the FIA F3 engine regulations.

If the rebranding of the German championship is confirmed, it will come in the wake of rumours that key teams Motopark Academy and Van Amersfoort Racing might be leaving the series.

PaddockScout Awards 2014: Newcomer of the Year