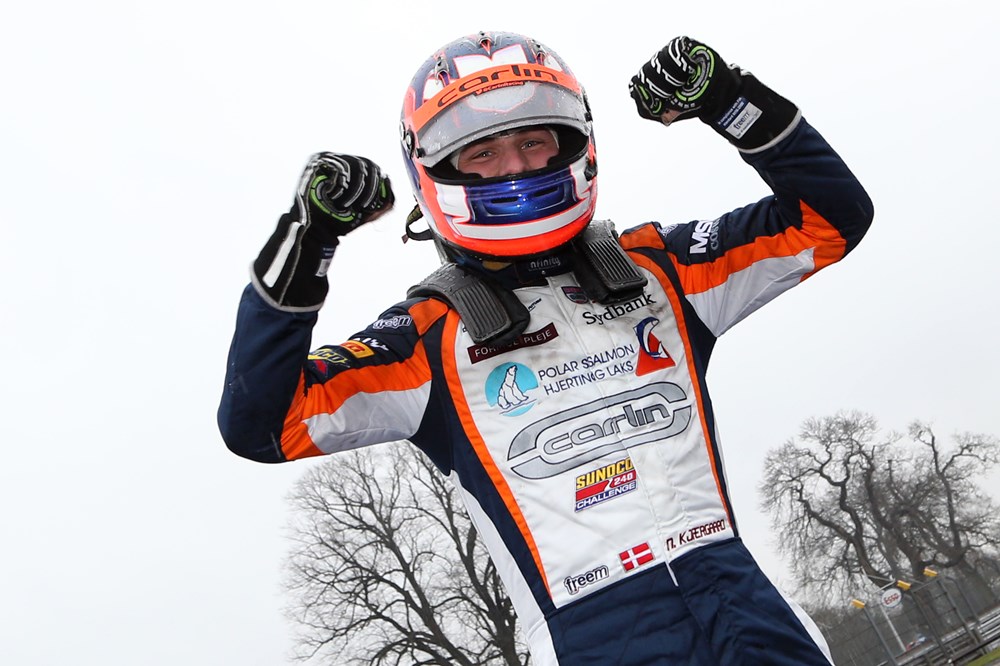 Nicolai Kjaergaard took victory in the final race of the season-opening BRDC British F3 weekend at Oulton Park, while his Carlin team-mate?Clement Novalak came from last on the grid to claim fourth place.

Race one winner Linus Lundqvist was forced to take to the grass after Tom Gamble attempted a move on the opening lap, meaning pole-sitter Kjaergaard was able to race into an early lead while race one winner Lundqvist dropped from second to fourth place.

Gamble set a serious of fastest laps to close onto the back of Kjaergaard, but couldn’t find a way past and was forced to settle for second place.

For Kjaergaard it was his first win in the series, having finished no higher than fifth as a rookie in 2017, and extended the championship lead he had claimed in race two.

Lanan?Racing’s Kush Maini completed the podium ahead of Novalak, who quickly cut his way through the field, settling into fifth before Lundqvist made another trip through the grass and handed Novalak fourth.

Lundqvist ended the race in fifth ahead of race two podium-scorers?Tristan Charpentier and Jamie Chadwick. They claimed sixth and seventh on the very last lap from Billy Monger, who capped off his return to single-seaters,?which included a podium in the opening race, with a third-top 10 finish.

Double R Racing’s Krish Mahadik, who was stripped of fourth place post-race two, finished ninth with Manuel Maldonado, fresh from taking his maiden victory, completing the top 10 for Fortec Motorsports. The Venezuelan was forced to start from the pit lane.

Jordan Cane,?who stood in for the injured Alexandra Mohnhaupt at Douglas Motorsport this weekend, didn’t start the race after his first-corner collision at in the previous race.

Championship standings after one round;?