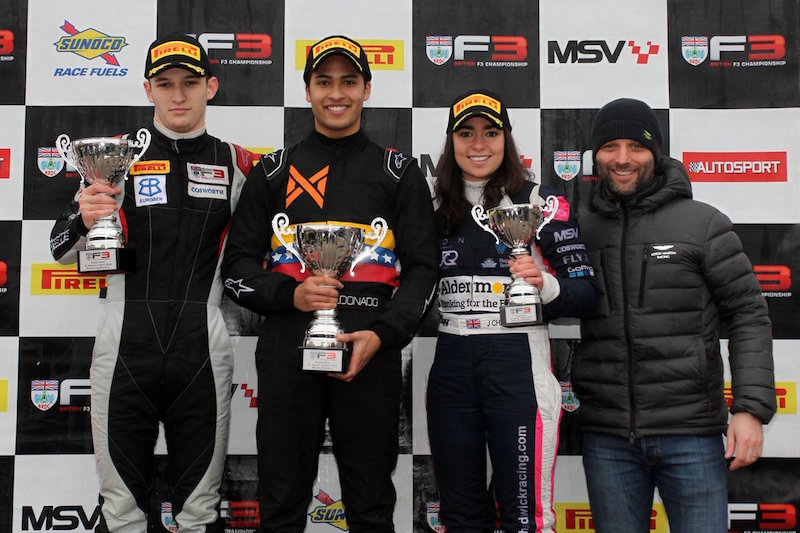 Manuel Maldonado took his maiden BRDC British F3 win in a frantic?rain-affected reversed-grid race at the season-opening round at Oulton Park.

The race was the first to feature the series’ controversial race two format, where the grid is formed from reversing all of the race one finishers, and a point is awarded for every position gained compared to a driver’s starting position.

Maldonado made a superlative race start to jump from sixth on the grid to first, passing his pole-sitting team-mate?Tristan Charpentier?into the first corner.

The top three, which featured Maldonado, Charpentier and Jamie Chadwick, were inseparable for the majority of the race.

They survived a safety car restart, once Pavan Ravishankar drove out of the gravel. When the race was red-flagged with three minutes to go, Maldonado took the chequered flag for the first time in BRDC British F3, with Charpentier leading home a Fortec Motorsports one-two, and taking his maiden podium.

Chadwick secured her second-ever podium in the series in third position, having started ninth. While the top three remained static for the majority of the race, carnage ensued behind.

Chris Dittmann Racing’s Chia Wing Hoong spun out of fourth place shortly after losing third place to Chadwick, while?Krish Mahadik, who had climbed from 12th to fourth position, also spun, a lap before the red flag was called.

As a result of the red flag, Mahadik was handed fourth position ahead of?Nicolai Kjaergaard, who was the greatest beneficiary of the new format, taking 10 bonus points after starting from 15th on the grid.

Kush Maini also benefitted from the red flag, after his spin was nullified and he took home sixth position, in front of 2017 Ginetta Junior champion?Tom Gamble and Clement Novalak, who took nine bonus points on top of his eighth-place finish, after starting last following his race-ending collision with Mahadik on Saturday.

Race one victor?Linus Lundqvist finished in ninth place ahead of Billy Monger: the duo came from 16th and 15th on the grid respectively.

Douglas Motorsport’s?Arvin Esmaeili was 11th ahead of?Sasakorn Chaimongkol,?Ben Hurst,?Sun Yue Yang and?Pavan Ravishankar. Hurst was shown the black flag for not having his rain light on, while Yang made an early pitstop with mechanical woes.

Kjaergaard will start the final race of the weekend from pole position later today, courtesy of the fastest lap in the dry first race, ahead of Lundqvist and Gamble.