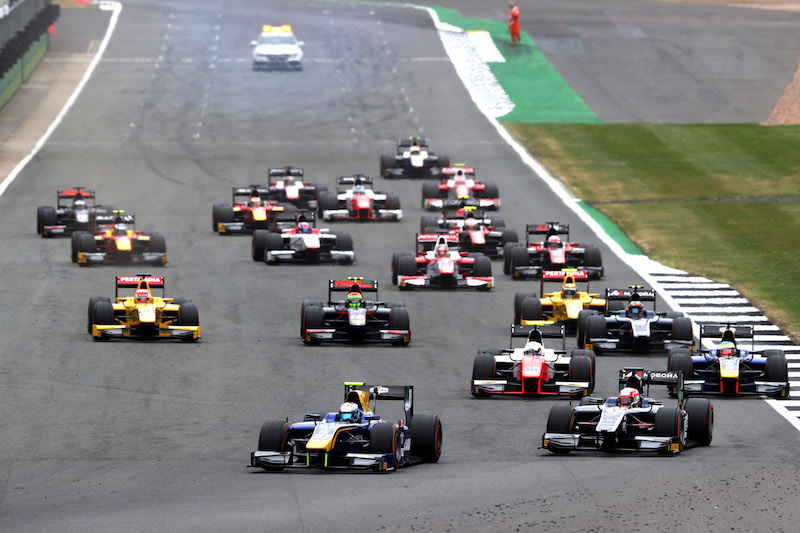 DAMS driver Latifi managed to keep the lead at the start, just ahead of a fast-starting Luca Ghiotto from third on the grid.

He was quickly able to build a two-second gap over Ghiotto, and he increased this over five seconds late on as his rival struggled for pace.

That advantage was eliminated by a late safety car, but when the race restarted with one lap to go he was able to win by 1.7 seconds.

Ghiotto spent most of the race having to defend from Oliver Rowland, who leapt from sixth to third at the start, getting past Jordan King in the opening turns.

The pair went side-by-side exiting the Loop for the first time and King was forced wide after contact, leading to his retirement.

Rowland was then attacked by Artem Markelov down the Wellington Straight, with the Russian driver edged onto the grass as he attempted to pass.

Stewards investigated Rowland for both manoeuvres, and although no action was taken over the King clash, he was handed a five-second penalty for forcing Markelov off the track.

Unable to find a way past Ghiotto, Rowland was on course to fall to sixth with his penalty before the safety car bunched the field up.

At the restart, Rowland slowed to create a gap of nearly five seconds in front of him in order to have some clean air, but he instead ended up being passed by Markelov down the Wellington Straight at the second attempt.

Race one winner Charles Leclerc had a tight battle with Sergio Canamasas in the middle of the race, eventually finding his way past after they ran wheel-to-wheel through several corners.

Leclerc therefore looked on course to take fourth, before Canamasas passed him around the outside of the penultimate corner of the race.

Norman Nato took sixth in front of a charging Nyck de Vries, who started last but shot to 11th with a rapid start.

He passed Nobuharu Matsushita at Club late on, although he did cut the inside of the apex in order to complete the move.

The late safety car was required when Ralph Boschung ended up on the grass down the Hangar Straight trying to pass Alex Albon, with the Campos driver then spat across the track and into the wall on the outside.

He got out of the car OK, but was having his right wrist looked at once he was behind the barriers.