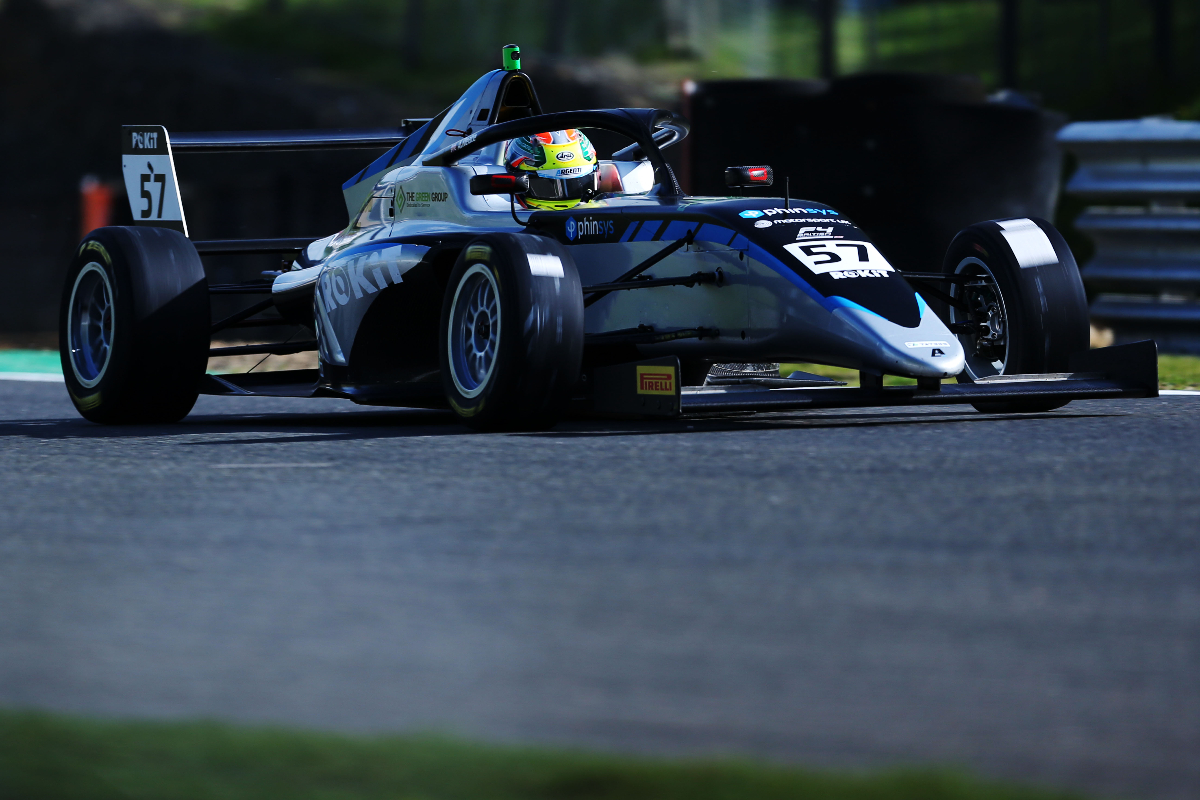 Argenti Motorsport’s Aiden Neate finally claimed his first Formula 4 win on his 59th start in the category at Thruxton.

It was an attacking performance from Neate in the British F4 reversed grid race, and he started from sixth place while JHR Developments’ Noah Lisle held the pole spot.

Lisle, whose best previous result was ninth, made a lightning start while the pack behind started fighting and he gradually pulled away to be 2.73 seconds clear at the front of the field after nine laps.

His team-mate Georgi Dimitrov sat in second, while Mercedes-AMG Formula 1 junior Daniel Guinchard led a train of cars from third down to ninth after passing the third JHR car of Joseph Loake on lap three. Neate lost a place on the opening lap to Louis Sharp, who he passed back on lap two, and he then cleared Ollie Gray on lap three.

Although Neate then chased down those ahead, he had Gray on his tail for some time and didn’t shake him off until lap eight when Dimitrov and Loake started dropping places and Neate rose up to third behind Guinchard.

Those two then set about hunting down Lisle, and on lap 13 Guinchard took the lead with a great pass around the outside of the first chicane. Two laps later he was back down to second though as he almost spun into the final chicane and Neate passed him. There were only two laps to go after that, and Neate kept himself ahead of Guinchard to finally win after 13 podium appearances on the lower two steps.

Lisle claimed his maiden podium in third, while an intense battle between Gray, Alex Dunne and Ugo Ugochukwu ended up being for fourth place as Dimitrov and Loake slid down the order late on. After being passed by Neate, Sharp was also involved in their fight.

Dunne passed Gray on lap seven but then didn’t get the move completed, and a lap later Dunne tried passing on the grass as Gray defended. He ended up still stuck behind, and on lap 14 went wide at the final chicane but managed to get ahead of Gray while they cleared Dimitrov. Gray then did him back into the first proper corner, and stayed ahead until the finish for fourth.

Sharp couldn’t keep up with them at the end of the race and finished ninth, with Dimitrov and Loake between himself and Ugochukwu in sixth.

Hitech’s Eduardo Coseteng had a slow opening lap then pulled into the pits to retire on lap three.