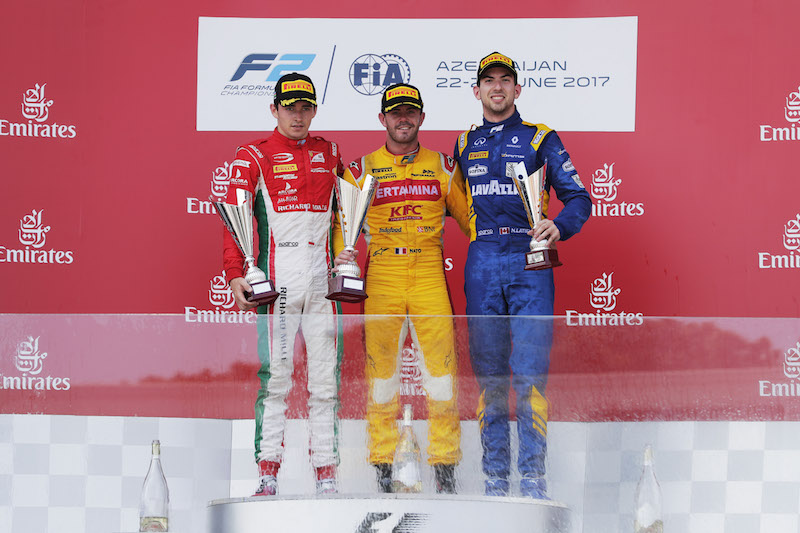 Norman Nato won the Formula 2 sprint race at Baku after a penalty stopped Charles Leclerc from celebrating a double victory.

Leclerc, starting eighth for the reverse grid race, won on track but was awarded a 10-second time penalty for failing to slow down for yellow flags.

Nato started in fourth place and jumped Jordan King on the start. On the third lap, he attempted a move on Ralph Boschung, who started from pole, going into Turn 2.

He clipped the rear of the Swiss driver?s car and damaged his front wing, although he could continue in the race.

He then inherited the lead when the DAMS car of Oliver Rowland slowed?with gearbox issues on lap eight.

After snatching the lead from Boschung at Turn 2 on the first lap, Rowland had increased his?gap to 2.2 seconds before his problem struck.

Championship leader Leclerc was 10th?after the first lap and appeared to be struggling to get by Artem Markelov.

But when he was told about Rowland, second in the championship, retiring, the Monegasque driver started opening fighting through the field.

He then used DRS to pass both Sirotkin and Boschung as he looked to close the gap on leader Nato.

When he did eventually move into second, after passing King and Nicolas Latifi, the gap to Nato was around 10s with nine laps left.

And after closing the gap down, Leclerc made the move on Nato with five laps remaining ? shortly after he was told about the penalty.

Leclerc had enough of a gap to Latifi in third to finish in second place.

Jordan King was fourth, ahead of Sergey Sirotkin in fifth.