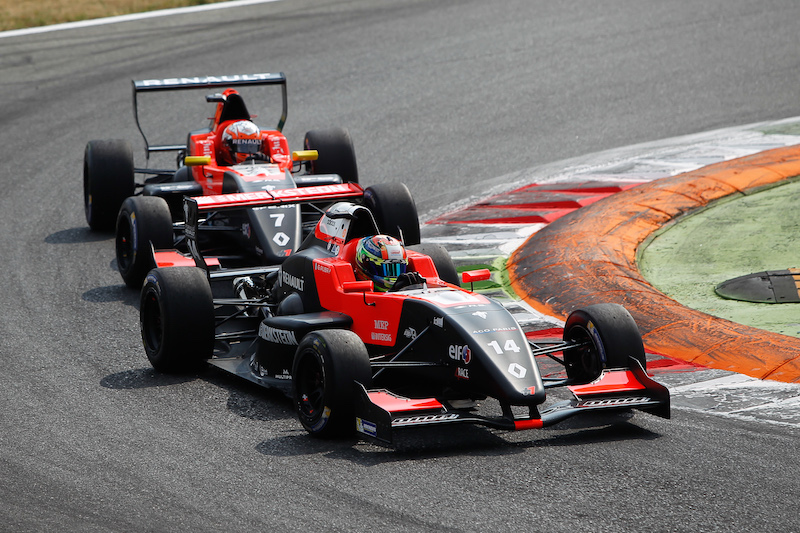 Gabriel Aubry triumphed in another close battle with Tech 1 team-mate Max Fewtrell in race two of the Formula Renault NEC opener at Monza.

Aubry started from pole and kept the lead off the start ahead of Gilles Magnus, who then went side-by-side for the lead into the second chicane.

With both Aubry and Magnus delayed on the exit, Fewtrell snatched the lead into the first Lesmo.

He didn’t have a chance to pull away though, as the safety car was called at the end of the lap after an incident on the straight leading to the Parabolica for three cars fighting over seventh place.

Bartek Mirecki and Theo Coicaud made contact while side-by-side, with Mirecki sent spinning to drivers’ left, while the following Presley Martono was also involved and sent crashing into the barriers on the right-hand-side.

There was another incident following the restart, with Sun Yue Yang sent spinning into the second chicane after a touch from Thomas Neubauer.

Renault’s Chinese protege was fortunate not to wipe anybody else out, but he did get stuck on the kerbs when he came to a halt, thus triggering the return of the safety car.

The race restarted once more with 13 of the 25 minutes remaining, and Fewtrell managed to keep?hold of the lead at first, before succumbing to Aubry into the first chicane with seven minutes left.

Aubry then went deep into the second chicane defending from Fewtrell, which allowed the Brit to have the inside line into the Lesmos, but the Frenchman held on on the outside.

From there, Aubry stayed ahead until the chequered flag, beating Fewtrell by six tenths of a second despite his rival posting the fastest lap on the final tour.

Formula Renault debutant Michael Benyahia completed the podium with a fine drive from eighth on the grid.

The Miami-born Moroccan climbed to fifth early on, passed Tech 1 driver Thomas Maxwell into the first corner at the first restart and then overtook his R-ace GP team-mate Magnus down the pit straight with five minutes to go.