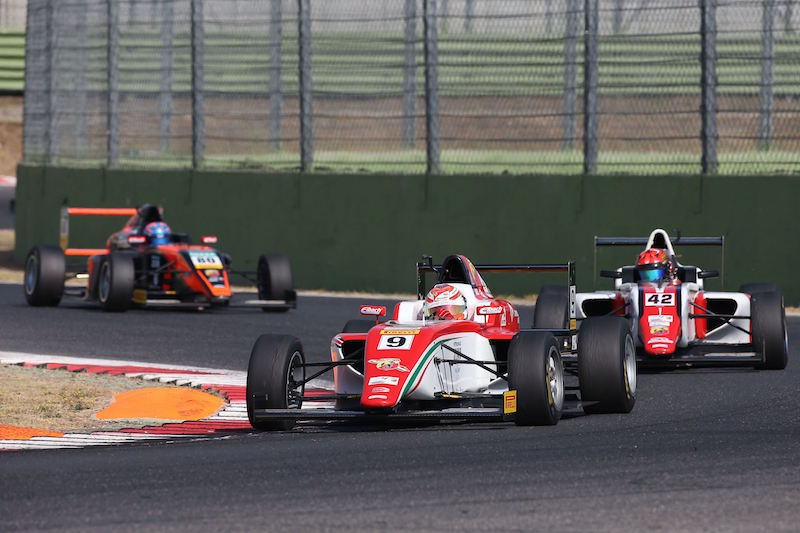 Ferrari academy driver Armstrong pulled away from the rest of the field after a long safety car period to take his first win in?the Italian series.

Artem Petrov followed him across the line, but not before a battle with Felipe Drugovich, who had taken second at the start of the race.

The first half of the 30 minute race was spent behind the safety car. The field made it to the end of the first lap without an incident, but just before the leaders started lap two, Lirim Zendelli ran into the back of championship leader Job Van Uitert, sending them both into the gravel and bringing out the safety car.

With 17 minutes left on the clock, Armstrong restarted the race, putting a gap between himself and Drugovich.

Drugovich was left to defend against Petrov, and the DR Formula driver found his way back into second.

Further back in the field, Van Amersfoort?s Louis Gachot was battling with Lorenzo Colombo for sixth position.

The pair spent the second half of the race swapping positions back and forth, with Sophia Florsch right behind them, looking for a way through.

The battle ended in the final minutes of the race, when Gachot and Florsch made contact and Gachot was forced to retire with a puncture.

Race one winner Ian Rodriguez crossed the line eighth, picking up positions after falling back to 10th?off the line. Kush Maini took ninth, ahead of rookie winner Leonardo Lorandi.