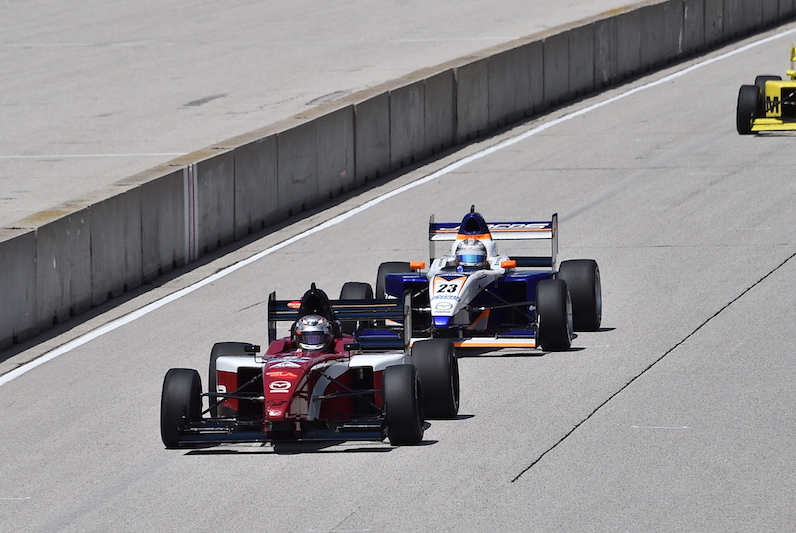 Red flags meant Franzoni was unable to set a representative lap time in qualifying for the second race, and as a result he started from the back of the 15-car field. Rival Martin started on pole.

He produced?remarkable four-lap surge from 15th to third, and when the first full course yellow?of the race occurred on lap five the gap that had emerged between Martin, T.J. Fischer and the rest of the field was immediately nullified.

At the start of the race Franzoni cleared four cars and by the second lap had moved ahead of another two to take ninth place. He ended lap two in sixth, and had progressed to fifth by the end of lap three.

On lap four?he faced the Team Pelfrey cars of Nikita Lastochkin and Carlos Cunha and cleared them in successive corners in impressive style.

A last corner crash by Brendan Puderbach meant the six seconds between the top two and Franzoni was removed by the pace car, and an engine problem for Fischer meant Franzoni was immediately on Martin?s gearbox for the lead.

Another FCY interrupted the lead battle, and Martin did ?everything he could? to keep the faster Franzoni behind him before the final FCY of the race, including running his rival off the road.

Martin was strong enough on the final lap restart to deny Franzoni a second victory, with the Brazilian having prevailed in race one?on Friday.

In that encounter Franzoni and Martin?s battling had occurred at the start of the race, with Franzoni losing the lead from pole (set by a over a second) and then reclaiming it several times in the first two laps.

Once Franzoni had asserted himself though he was clear, and Martin dropped over 11 seconds during the remaining 12 laps. He retained second, with Lastochkin taking his first podium of the weekend after a short battle with Pelfrey team-mate Fischer.

In the second race third place fell to Lastochkin again after an intense race long battle with team-mate Cunha that was decided on the final lap.

The fastest lap secured in the first race by Franzoni means he extends his championship lead by one point.