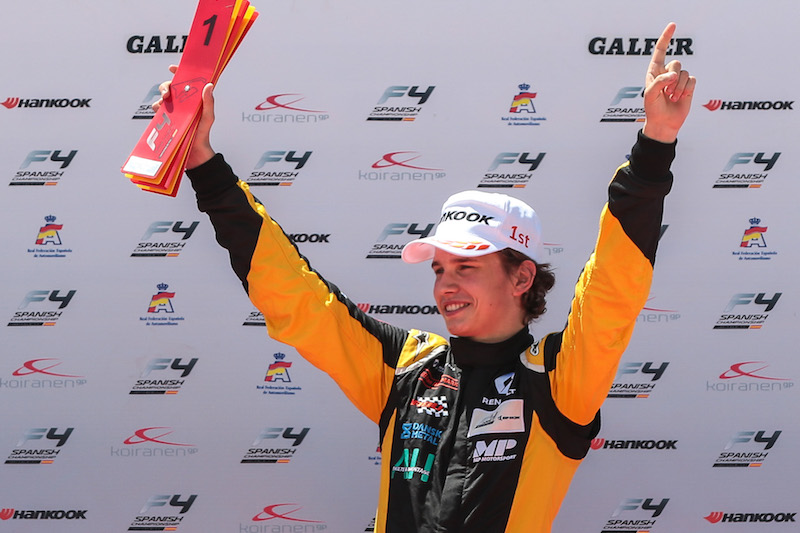 Christian Lundgaard came from sixth on the grid to complete a hat-trick of wins on the opening weekend of the Spanish Formula 4 season at Motorland Aragon.

The Renault-backed Dane could only manage sixth in the morning qualifying session, but he made up two places on the first lap and on lap three he took third from Juuso Puhakka at Turn 1 and second from his MP Motorsport team-mate Bent Viscaal at the Turn 16 hairpin.

He soon caught pole-sitter Tuomas Haapalainen, although it took until there were 12 of the 25 minutes remaining to get past the Finn around the outside of the first corner.

Thereafter, he pulled away to win by 5.5 seconds over Haapalainen.

Viscaal also caught Haapalainen but then came under pressure from eighth-place starter Nikita Volegov, and ran deep defending from the Russian at Turn 16 inside the final minute.

With Volegov past for third, Lukas Dunner also got alongside Viscaal into the Turn 17 right-hander, where the Dutchman spun and fell down the order.

Puhakka had earlier made the same mistake as Viscaal to let Volegov and Dunner past, and came home in fifth.

From fourth on the grid, Xavier Lloveras once again fell backwards early on, down to eighth, and he later lost out in a side-by-side duel with his rookie FA Racing team-mate Guillem Pujeu, who would finish up sixth.

Lloveras was trying?to pass Sami-Matti Trogen heading into Turn 1 late on when Ivan Berets ran into the back of Trogen’s car and mounted the innocent Spaniard, putting both out on the spot.

Alexander Smolyar returned to action after his big crash in race two, and finished 11th after having to serve a drive-through penalty for causing his incident.