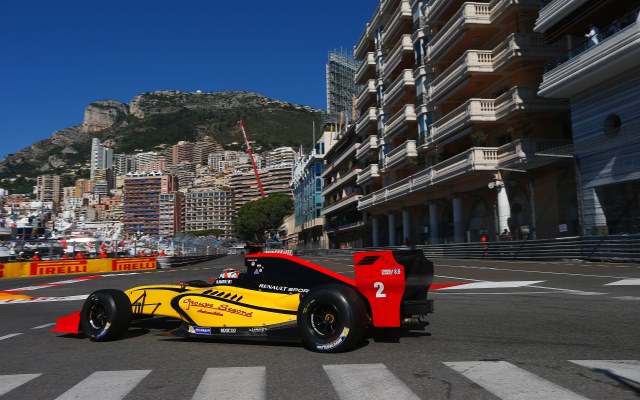 Norman Nato led from pole position to chequered flag to claim his maiden Formula Renault 3.5 race on the streets of Monaco.

Nato kept the lead at the start as Marco Sorensen moved ahead of Jazeman Jaafar to take second. Sorensen pushed hard to keep up with Nato and closed to only a second behind inside the final ten minutes, but Nato had enough in reserve to stay ahead and claim victory by 0.790 seconds.

The Frenchman, in his second season in the category with DAMS, had only managed a best finish of tenth place in the opening two rounds of the season. The result completed a clean sweep for DAMS of the junior races in Monaco, following their victories in the two GP2 races earlier in the weekend.

After a difficult start to his year, Sorensen got his first podium of the season with a repeat of his second-place from 2013.

Also finishing in the same place as last year was Jaafar. The Malaysian lacked the pace of the leaders and finished 12 seconds behind, but managed to withstand pressure from championship leader Carlos Sainz and top rookie Oliver Rowland.

Rowland made a superb move down the inside of Sainz into Sainte Devote for the first time, but ran deep which allowed Sainz to fight back and re-take fourth place up the hill. The Spaniard, who was demoted from the front row of the grid for impeding in qualifying, managed to close right up on Jaafar on a couple of occasions, but couldn’t find a way past and settled for fourth. In a repeat of the result achieved by his predecessor Kevin Magnussen 12 months ago, Sainz extended his championship lead by finishing ahead of his main rivals.

Rowland finished on the tail of Sainz in fifth, with Zoel Amberg absobring race-long pressure from Pierre Gasly to finish sixth. Will Stevens had a quiet run to eighth, with Roberto Merhi and Meindert van Buuren completing the top ten.

After his Fortec crew had the engine cover off on the grid before the race, Sergey Sirotkin then failed to get away from sixth on the grid. After he did get going, the Russian’s difficult start to the season continued when he backed his car into the barriers at the final corner.