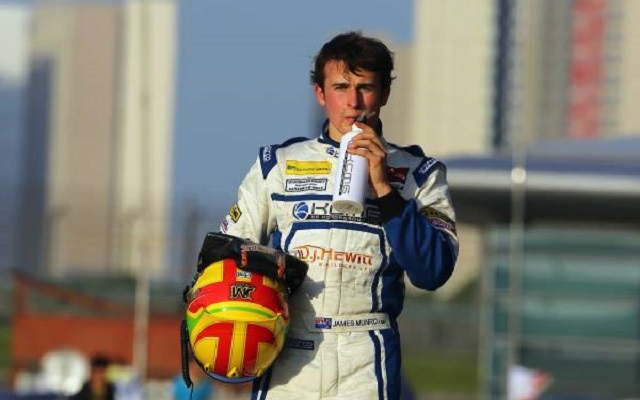 KCMG driver James Munro completed yet another clean sweep with a victory in race three at Shanghai, thus taking his fifth victory of the season and maintaining a perfect 100 % record.

Munro got off to a good start from pole, his third this weekend. Behind him, Matthew Solomon made amends for his poor start in race two by getting a good launch off the grid and passing Munro’s teammate Dan Wells. He even managed to challenge Munro, but the Kiwi closed the door on him and remained out in front.

That wasn’t the end of the battle for the lead though, as Solomon kept within two seconds off Munro for the first half of the race, before closing in on the championship leader near the end. However, a late red flag helped Munro hold on to first.

There was a fight for the final spot on the podium between Wells and Aston Hare, with the South African prevailing over the Briton, who was struggling with balance issues for most of the race. Pu Jun Jin finished in a lonely fifth place in his Eurasia Motorsport car, seven seconds ahead of Matthew Swanepoel.

An entertaining race-long four-way battle between the Humpuss Racing pair of Senna Iriawan and Darma Hutomo, and Hare’s Meritus teammates Andersen Martono and Mandla Mdakane ended with Mdakane being pitched into a barrel roll on the last lap, bringing out the red flag. The race results were rolled back two laps, meaning that Hutomo took seventh ahead of Martono, Iriawan and Mdakane.

After five races out of a total eighteen, Munro leads the championship with 88 points, with Wells a distant second on 51 and Solomon four points behind in third. KCMG lead the teams’ standings with 135 points ahead of Eurasia Motorsport on 75.