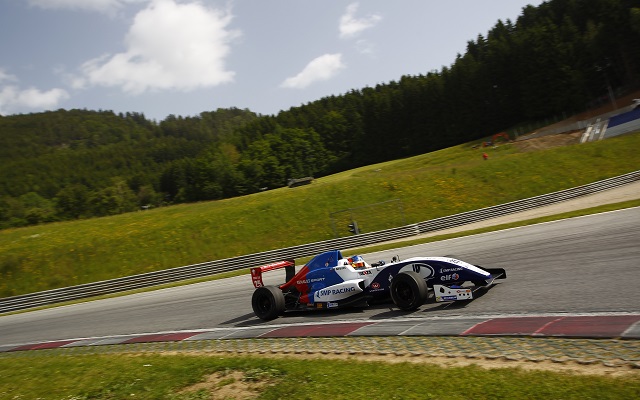 Having picked up his maiden win in Formula Renault yesterday, Matevos Isaakyan led another confident race from pole, securing a second victory at Spielberg.

The SMP-backed JD Motorsport driver got a solid launch from the grid to lead the field into turn one and would not give up first place throughout the entire 18-lap distance of the race.

Isaakyan was somewhat assisted by the battles going on behind him, with several drivers fighting it out for the final podium spots.

Nyck de Vries started on the front row but had a difficult getaway off the line. Cram’s Alessio Rovera got a great start to take second, while George Russell pipped de Vries to third out of turn one.

De Vries managed to wrestle third back during the lap and set out after Rovera, with Isaakyan pulling off into the distance.

The Dutchman managed to keep up with Rovera but never managed to get close enough to challenge the rookie for second whilst, behind him, Fortec’s Charles Leclerc found his way past Russell and into fourth.

Soon, Leclerc managed an aggressive move to take P3 from de Vries, with Russell following through as his teammate ran wide. However, again, de Vries managed to wrestle a position back right away, demoting the Brit to fifth.

In the closing minutes of the race, de Vries passed Leclerc and settled into third place. Ahead of him, Rovera managed to close in on Isaakyan.

The Italian was just 0.7s behind entering the final lap, but Isaakyan managed to bring the car home in first. Rovera bagged a career-first Alps podium in second, while de Vries, again, rounded out the podium.

Leclerc kept Russell at bay to take fourth, while Alex Bosak emerged in sixth after a race-long battle in the middle of the pack. Simon Gachet fought his way up from the back of the field to take seventh, while Dario Capitanio, Luke Chudleigh and Martin Kodric rounded out the top ten.