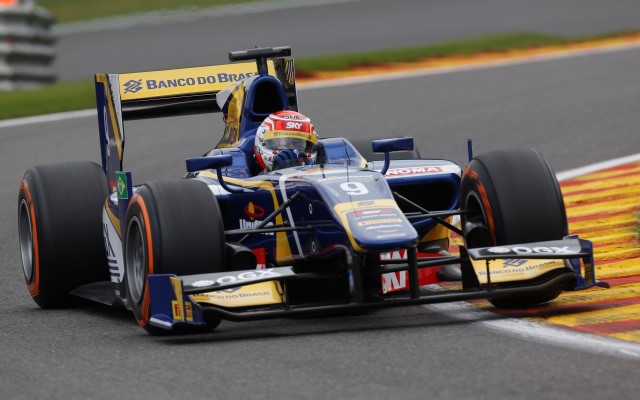 Felipe Nasr will remain with the Carlin team as he continues in GP2 this year.

The Brazilian finished fourth in the standings last year with the British squad, with whom he claimed the British F3 crown in 2011. He finished tenth in his rookie season of GP2 the following year with DAMS, before returning to Carlin.

He has failed to secure a race win, pole position or fastest lap from his 44 starts so far in the category, but does have ten podiums to his name. He began 2013 by finishing all of the first eight races within the top four, but faltered as the campaign wore on.

“I?m really happy to be with Carlin this year, we had a tough fight on our hands last year and although we missed out on the championship through some bad luck and some difficult races, I think overall the season was very positive for us,” said the 21-year-old.

“We work very well together and it?s a very easy relationship. This year I want to go one better and push hard to win the championship; with a strong team like Carlin, and the new rules in regards to the tyres I think we can do this.

“It?s also going to be a great year for me to be involved with the Williams Formula 1 team and learn from them. I?ll be attending every race this season with a strong attitude so can?t wait for everything to start.”

Carlin have recruited Julian Leal over the winter from Racing Engineering to fill the other seat alongside Nasr, vacated following Jolyon Palmer‘s switch to DAMS.

Team boss Trevor Carlin said: “Everyone at Carlin loves working with Felipe ? he is a passionate driver, always works hard with his engineer and is a fighter when he races but most of all he?s a pleasure to work with.

“He had an unlucky second half to his year in 2013 but I think he will be one to watch this season. We?ll also be excited to see him in the free practice sessions with Williams F1.”