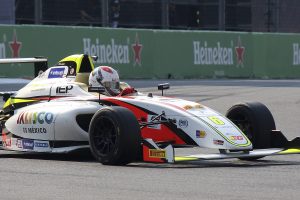 NACAM Formula 4 will conclude its 2019-20 season in October after adding three replacement rounds to the schedule.

Prior to the global coronavirus pandemic, an end date of May 30/31 in Mexico City had been set for the series.

Following round four of the season at Autodromo Emerson Fittipaldi at the end of February, the remaining rounds were all postponed or cancelled, with a replacement event also quickly being cancelled.

A series source told Formula Scout in May that a trip to Parque Tangamana in August was the target for the restart of racing action, and that has now been confirmed with three races taking place over the August 22/23 weekend.

Mexico City has not been able to find a way to easily host international motorsport again within current coronavirus restrictions, and has not reclaimed its spots on either the Formula 1 or NACAM F4 calendars.

Series organisers have been able to fit a replacement event at Queretaro, which was used in NACAM F4’s predecessor LATAM Challenge in 2011 and in Formula Panam in 2015. It will host races on September 19/20.

The season will finish as expected at Monterrey, on October 17/18, with the next season now likely to start in 2021 due to both the current season’s delay and Mexico City’s absence from F1’s 2020 calendar.

There are two scheduling clashes with USF2000 on the new calendar, which may end Nico Christodoulou’s F4 title chances and also rule out the likes of Nolan Siegel and Reece Gold completing the season.

NACAM F4’s Esports series is still ongoing, and now uses a virtual version of the Dallara F317 Formula 3 car rather than the Mygale F4 chassis as originally planned.