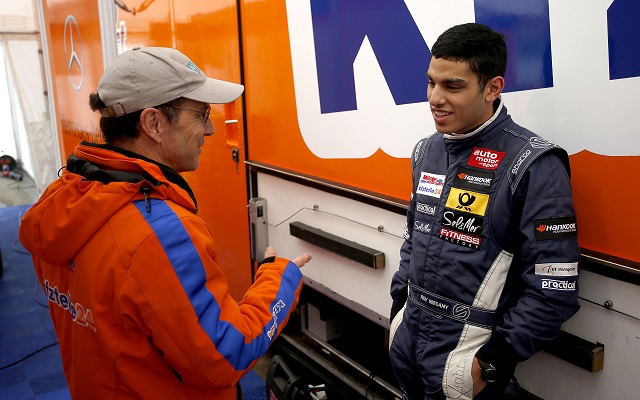 Roy Nissany will continue driving in the FIA F3 European Championship in 2014, having been announced with Mucke Motorsport.

Nissany, 19, has been virtually inseparable from the Berlin-based squad for the bigger part of his career in junior single-seaters. In 2011, he joined Mucke in ADAC Formel Masters and took eighth in his rookie year, repeating the same result in a sophomore campaign and adding a maiden victory to his resume. He joined the FIA F3 series in 2013 and took 22nd in the standings with a best finish of 8th.

“I am very happy to continue with Mucke Motorsport”, emphasized Nissany. “Don?t forget that I am driving in the team since I was 14 years old and I am proud to be part of it. It is a good feeling that Peter Mucke, the engineer and mechanics believe in me and I will put in all the effort to bring the best results.”

The Israeli racer is the second driver confirmed for Mucke’s 2014 assault, as the team previously announced FIA F3 race winner Lucas Auer. In 2013, Mucke took runner-up in the drivers’ and the teams’ standings, with ten wins courtesy of team leader Felix Rosenqvist.

“Our whole team is happy to continue the team work with Roy Nissany”, stated Peter Mucke. “He is now in his fifth year and learned a lot ? at the ADAC Formula Masters until 2012 and last year at the FIA Formula 3 European Championship. Roy is indigenous from scratch, he has a professional environment and will be able to entrench himself in the top ten this year. He will surely make his way.”

The exact number of cars to be fielded by Mucke is unclear as of yet, although three appears to be the most likely estimate. Among those believed to be in contention for a drive with the German squad are ADAC Formel Masters champion Alessio Picariello and German F3 Trophy class victor Sebastian Balthasar.