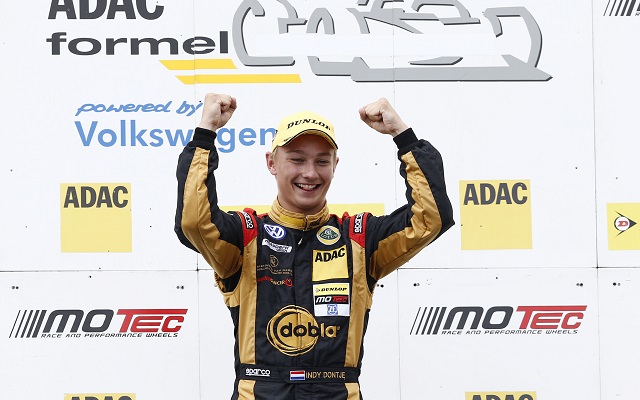 Dutch racer Indy Dontje will continue his partnership with Motopark Academy as he makes the switch to German Formula Three for the 2014 season.

The 21-year-old graduates from the ADAC Formel masters series, where he raced with Motopark under the Team Lotus name for two consecutive seasons. He finished seventh in his debut year in 2012 and went one place better the following year, picking up two victories and finishing as the highest scoring Motopark driver.

“In my two years with Team Lotus-Motopark, I have learnt an awful lot”, stated Dontje. “I fully intend to put that to good use in the higher class. Keeping my usual environment and maintaining my place within Team Lotus-Motopark will help me find my feet in the new class as quickly as possible. However, one must not underestimate the challenge of Formula Three. 2014 promises to be a bumper year ahead, with a whole breed of new drivers joining the grid. I hope I can challenge the victory in the Rookies? Cup.”

“After two successful years in the Formel ADAC, it was time for him to move up”, noted Motopark principal Timo Rumpfkeil. “He has shown so much speed and potential in our Formula Three tests that we?re sure he can fight for victory in the Rookies? Cup immediately.”