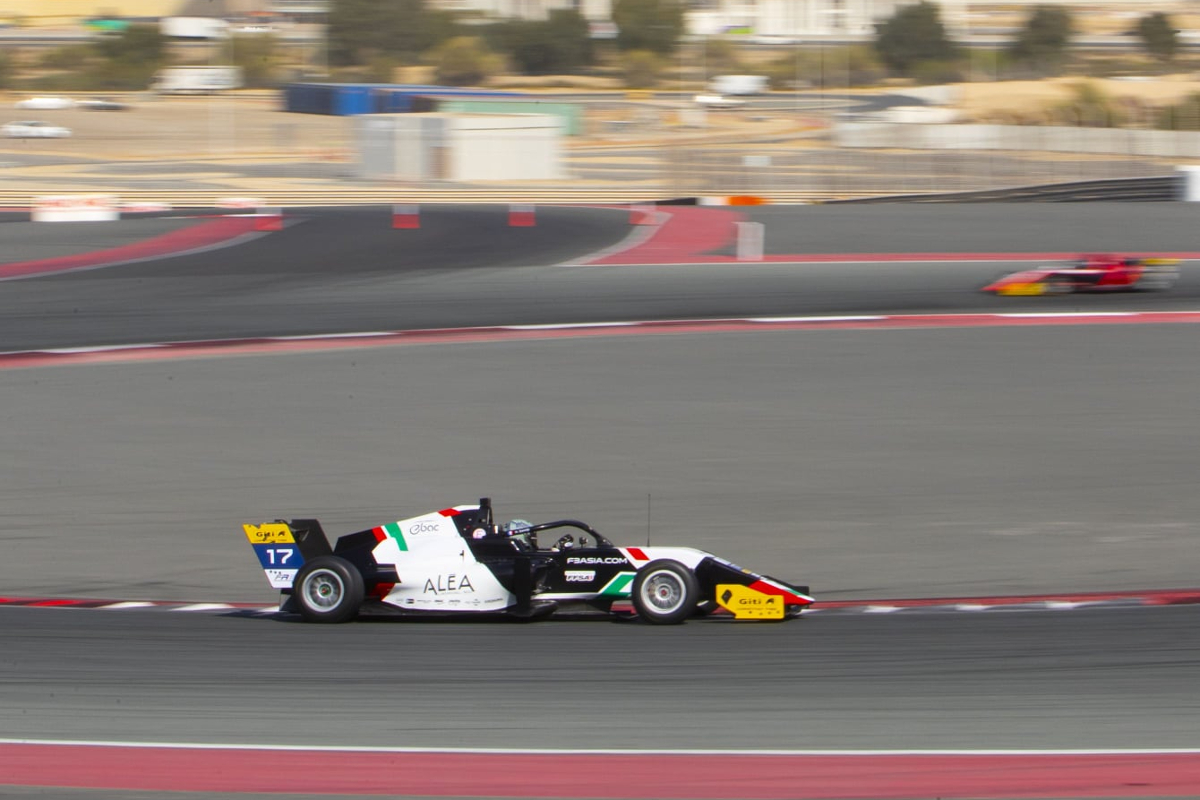 Hadrien David will start from second and first for races one and three of what is scheduled to be his last Formula Regional Asian Championship appearance at Dubai Autodrome.

In Q1 it was Evans GP’s Frederick Lubin who was first to lead the way, but with seven-and-a-half minutes remaining the first true flying lap came in from Mumbai Falcons’ Dino Beganovic who set a 1m34.711s to head a close top three with team-mate Sebastian Montoya and Abu Dhabi Racing by Prema’s Jak Crawford 0.045 seconds and 0.077s back respectively.

On his next lap Montoya improved to a 1m34.335s, and from there the battle for pole was settled.

He stayed out to do several more laps but couldn’t go faster, and neither could any of his rivals. 3Y Technology by R-ace GP’s David got close a few times, eventually coming short by 0.063s while Crawford also got within a tenth of pole.

Pinnacle Motorsport’s Pepe Marti got faster as the session went on to beat Beganovic to fourth, while the title contenders lacked frontrunning pace.

Hitech GP’s points leader Gabriele Mini was over half a second back in eighth, sandwiched between team-mate Isack Hadjar and Mumbai Falcons rival Arthur Leclerc, R-ace’s Gabriel Bortoleto was just ahead in sixth and his team-mate Lorenzo Fluxa was only 23rd fastest of the 26 drivers and over two seconds slower than Montoya.

Q2 ran for a few minutes before the red flags were waved, while Beganovic was at the top with a unrepresentative laptime, and there was quite a delay of before it restarted with 11 minutes to run.

When drivers started setting flying laps there was rapid improvements, with Leclerc, Lubin, Mini and then Hadjar all going fastest within a period of 30 seconds.

Marti was next to find a few tenths and went to the top with a 1m34.410s. With 3m40s to run David then got close, going 0.027s slower, while Mini and Crawford were within a tenth of him.

Mini returned to the top with three minutes remaining, going 0.121s faster than Marti. Bortoleto and Hadjar almost instantly slotted themselves into second and third, with Bortoleto just 0.006s slower than Mini.

With 35s to go the order changed again, as David and Marti went first and second and split by 0.041s. Mini was now a tenth off pole again, and failing to improve on his final lap consigned him to third while Leclerc and Montoya were seventh and eighth.