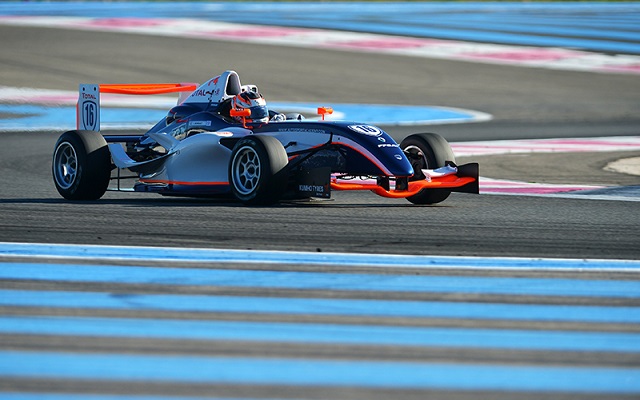 Having secured his first pole of the season in qualifying, Valentin Moineault followed that up with a maiden race win in the final outing of the French F4 season at Paul Ricard.

The Frenchman withstood heavy pressure throughout the 15-lap race, but managed to remain out front at all times to become the year’s ninth different winner.

Paired up on the front row with series champion Lasse Sorensen, Moineault managed a decent start and moved over on the Dane just before Verriere.

Behind them, row two starters Felix Hirsiger and Dorian Boccolacci, who were embroiled in a battle for P2 in the standings, both slipped behind Patricio O’Ward off the line. Hirsiger then got caught up in the usual lap one mayhem and had to take to the pits, effectively forfeiting the runner-up spot.

While Moineault managed to establish a slim 0.7s gap to Sorensen over the opening laps, it didn’t last and the Dane was shortly all over the race lead. He tried a move into the key overtaking spot of the weekend – around the outside into Signes – but Moineault successfully blocked.

As Sorensen continued to closely shadow Moineault, the pair were joined by Boccolacci, who had overtaken O’Ward earlier and then rapidly caught up to the leaders.

The Lotus junior managed to put pressure on Sorensen, giving Moineault some breathing room in the latter half of the race, but the series champion was soon back on the leader’s rear wing. His best shot yet came at the penultimate lap with another outside move into Signes, but Moineault held his line and retained first.

On the final lap, Moineault manages to shake off the opposition and stormed to the checkered flag, celebrating his first win in cars. Boccolacci was side by side with Sorensen through several corners, but the Dane managed to narrowly keep second, albeit by running wide in the final turn.