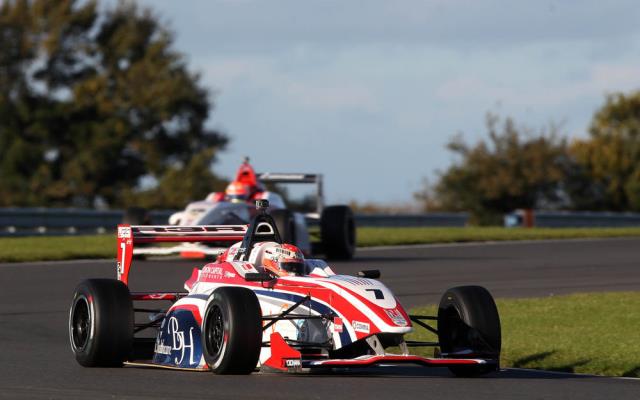 Raoul Hyman won the penultimate race of the BRDC F4 season ahead of George Russell and Sennan Fielding as all three reduced the points gap to championship leader Arjun Maini going into the title decider.

Maini had started from the reverse grid pole position and led the opening stages, as Hyman passed Russell for P2. Hyman would take the lead away from Maini on lap four, with Russell following him through.

Russell then set a string of four consecutive fastest laps to cut the gap to Hyman from 1.3 seconds down to less than 0.4s, but he would lose time again at the end and finish 1.5 seconds adrift as Hyman scooped his fourth win of the season.

Maini was shuffled down to fifth on lap seven behind Fielding and Struan Moore, who had exchanged places two laps earlier.

Fifth place at the flag for Maini means his points advantage is cut to 13 over Russell, 18 over Fielding and 25 over Hyman. 35 points are available for a win in the final race – Maini will need a podium finish to guarantee himself the title regardless of what his rivals can do.

Having set the fastest lap in both races so far this weekend, Russell will start the decider from pole position. Hyman will be alongside him on the front row, while Fielding pips Maini to P3 on the grid by just seven thousandths of a second. If those grid positions were maintained until the finish, Russell would overhaul Maini by one point.

Race one winner Diego Menchaca got into trouble on the first lap, pitting along with Will Palmer, before both returned to action.