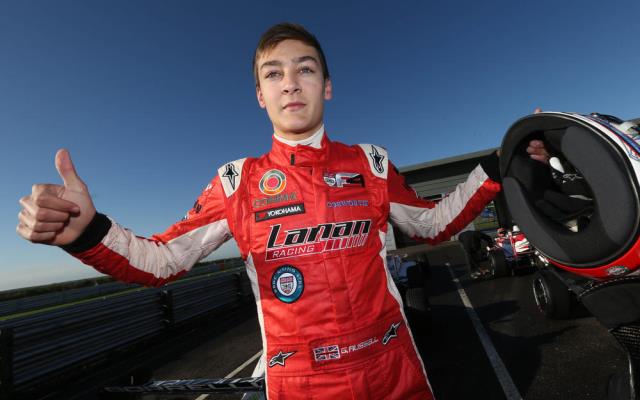 George Russell is the BRDC F4 champion for 2014 after winning the title showdown at Snetterton.

Russell started the race from pole position but was beaten away from the line by Raoul Hyman. This meant the title was set to go to the erstwhile points leader Arjun Maini in fifth place.

However, Russell fought back from his poor start, taking the lead away from Hyman on lap two. This now meant the title initiative was his, and that Maini would have to get onto the podium to stop him.

A series of quick laps opened up Russell’s lead to 1.4 seconds at the end of lap six. Hyman fought back with a fastest lap of his own to bring the gap back down to 1.1s, only for Russell to respond on lap eight.

Hyman was the quicker of the two in the final two laps, but Russell had enough in hand to win by 0.738 seconds.

As the race wore on, Maini was unable to keep in touch with the leading quartet and had to make do with fifth, meaning that Russell finished up with three more points.

Hyman was one of two other title contenders coming into the race, and his second place finish was enough to beat Sennan Fielding into third in the standings by a single point. Fielding started third and held that position for the opening lap, but was passed by the impressive Charlie Eastwood on lap two.

Eastwood was close to challenging the lead pair soon after that before dropping off, but held onto third to secure his second podium finish of the weekend and end a difficult rookie season on a high.

Behind the leading five, Struan Moore inherited sixth when Rahul Mayer dropped down the order. Seventh was Gaetano di Mauro ahead of Piers Hickin and Diego Menchaca, while Mayer recovered to pip Connor Jupp to tenth by just 0.082s.