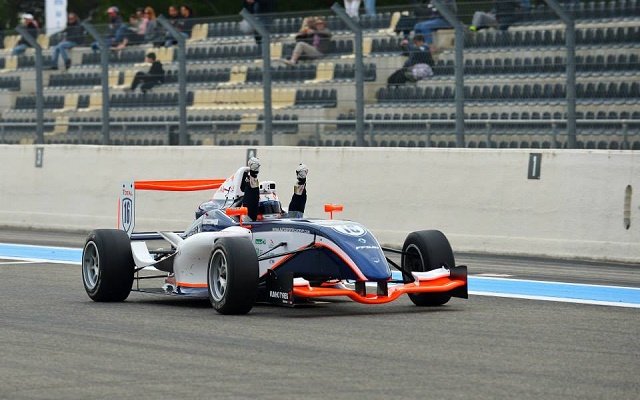 On the other hand, race winner Gjergj Haxhiu is not present on the list, despite revealing his intent to participate.

Valentin Moineault is the championship’s highest-placed returnee, having finished sixth in 2014. He is the only entry with a prior French F4 win to his name, having triumphed in the Paul Ricard season finale.

Simo Laaksonen, who finished on the podium at Pau on his way to 17th overall, is also coming back, as is fellow Scandinavian Reuben Kressner, who ended up one spot below, and Hugo Sugnot-Darniche, who took 23rd.

French karting prodigy Julien Darras is arguably the highest-profile addition to the series. 17 years of age, Darras has won the Italian championship in the KF2 class in 2013 and finished fourth in the WSK Champions Cup’s KF class in 2014.

Nikita Sitnikov, 16, is another prominent karter entering the series. He was the 2012 Viking Trophy KF3 champion, finished runner-up in the KFJ Trofeo Andrea Margutti the next year and was third in the WSK Master Series.

Chinese karting driver Ye Yifei is the sole Asian on the entry list and has just recorded his arguably biggest achievement in karts – a runner-up finish in the Vega International Trophy in KFJ.

Compatriots Alexey Korneev and Nikita Troitskiy also move up to cars, with both of them, as well as Isaakyan and Sitnikov, having tested in the new SMP F4 category.

Sacha Fenestraz joins the series after finishing seventh in both the French Championship 150 and the ROK Cup Junior in 2013. He is joined by fellow French championship graduate Julien Andlauer – once a runner-up in the IAME International Final X30 Junior.

American Michael Benyahia enters at just 14, having finished four races out of seven on the podium during his stint in the Skip Barber Winter Series.