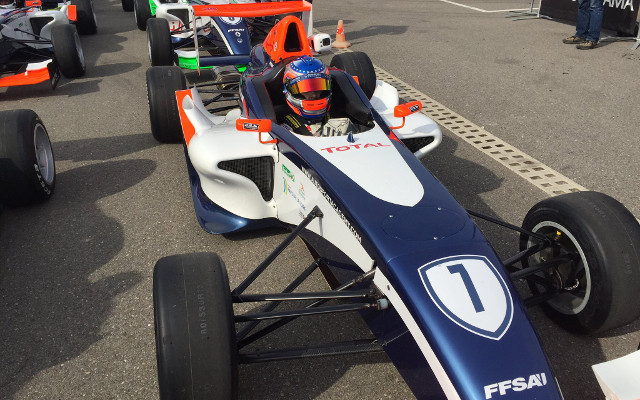 French F4 leader Valentin Moineault triumphed in qualifying at the penultimate round at Navarra in Spain, edging out Giuliano Alesi to score a third straight double pole position.

Moineault went to the top of the times just inside the second half of the 30-minute session, posting a 1m45.302s that remained good enough to take pole for race three.

Alesi had climbed to second in the times, one tenth adrift of Moineault, with 10 minutes remaining and held the position until the end.

On second-fastest times, setting the grid for race one, Alesi fell just three thousandths of a second short of matching Moineault.

Moineault’s pair of pole positions follows similar achievements at the Hungaroring and Magny-Cours, where he converted all four poles into wins.

Alesi returns to the front row of the grid for the first time since his double pole and victories on his car racing debut at Ledenon in April.

Also taking his best qualifying result since the opening round was Julien Andlauer, who finished up third after leading prior to Moineault’s pole lap.

Practice pacesetter Gabriel Aubry took fourth ahead of Kami Laliberte, while Moineault’s chief title rival Sacha Fenestraz had to make do with sixth after a late improvement moved him above Julien Darras, though it’s the latter who will start ahead in race one.

Simo Laaksonen?and Ye Yifei will start eighth and ninth in both main races, while 10th will be shared between Nerses Isaakyan and?Reuben Kressner.