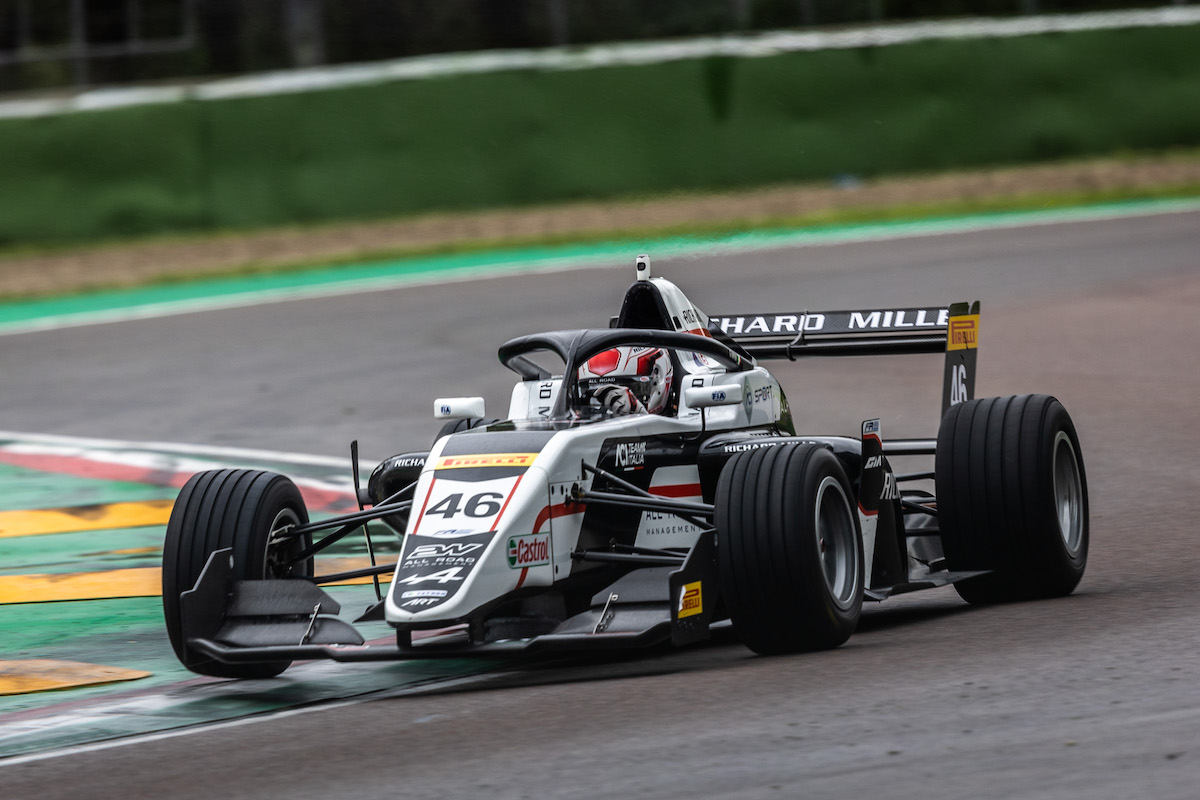 With 36 drivers split into two groups for qualifying, Mini’s time from Group A was good enough to hold off team-mate Mari Boya, who set the fastest time in Group B, by 0.229s.

The Prema pairing of Dino Beganovic and Sebastian Montoya will start from the second row by virtue of setting the second-fastest times in Groups A and B respectively.

Though the racing line was dry enough for all the runners to fit slicks for their 15 minute split qualifying sessions, significant damp patches offline, particularly on the descent to Acque Minerali, necessitated caution from the FREC field.

Mini looked in control of the first group from the moment that he moved to the head of the timing screens after 10 minutes, immediately lowering the fastest lap to a time 1m39.526s.

The Prema duo of Beganovic and Paul Aron, both race winners at Monza, moved into the top three in the closing minutes, having not featured at the front in the first ten minutes.

Having backed off on his penultimate lap after running into traffic, Mini looked to be on course to improve further on his final tour, setting his fastest first sector time, before a red flag caused by Victor Bernier prevented any further changes in position.

Beganovic, who also lost out on a potentially quicker last lap, and Aron completed the top three. R-ace GP’s pair of Gabriel Bortoleto and Hadrien David had to settle for fifth and seventh respectively, having at one stage topped the times, split by Trident’s Leonardo Fornaroli in sixth.

Group B witnessed a thrilling battle at the top of the times between up to eight drivers, with the fastest time switching between them throughout the session.

Boya emerged on top although a late attempt to improve his time, and possibly beat Mini’s best time from Group A, was thwarted as he ran wide out of Villeneuve.

Montoya left his challenge late, jumping up to second in the final minute of the session to demote Van Amersfoort Racing’s Kas Haverkort to third, the Dutchman having briefly topped the group. Trident’s Tim Tramnitz and Roman Bilinski each took turns at the head of the group before ultimately dropping to fifth and eighth.

One of the outstanding performers in Friday’s wet practice sessions, Maceo Capietto, could not improve on ninth in the group, and consequently 18th on the grid.

Patrik Pasma, making a one-off return to KIC Motorsport in place of Piotr Wisnicki, will start from the back of the grid, having finished 18th in Group B.

Track limit infringements caused the deletion of 11 laps across both groups.