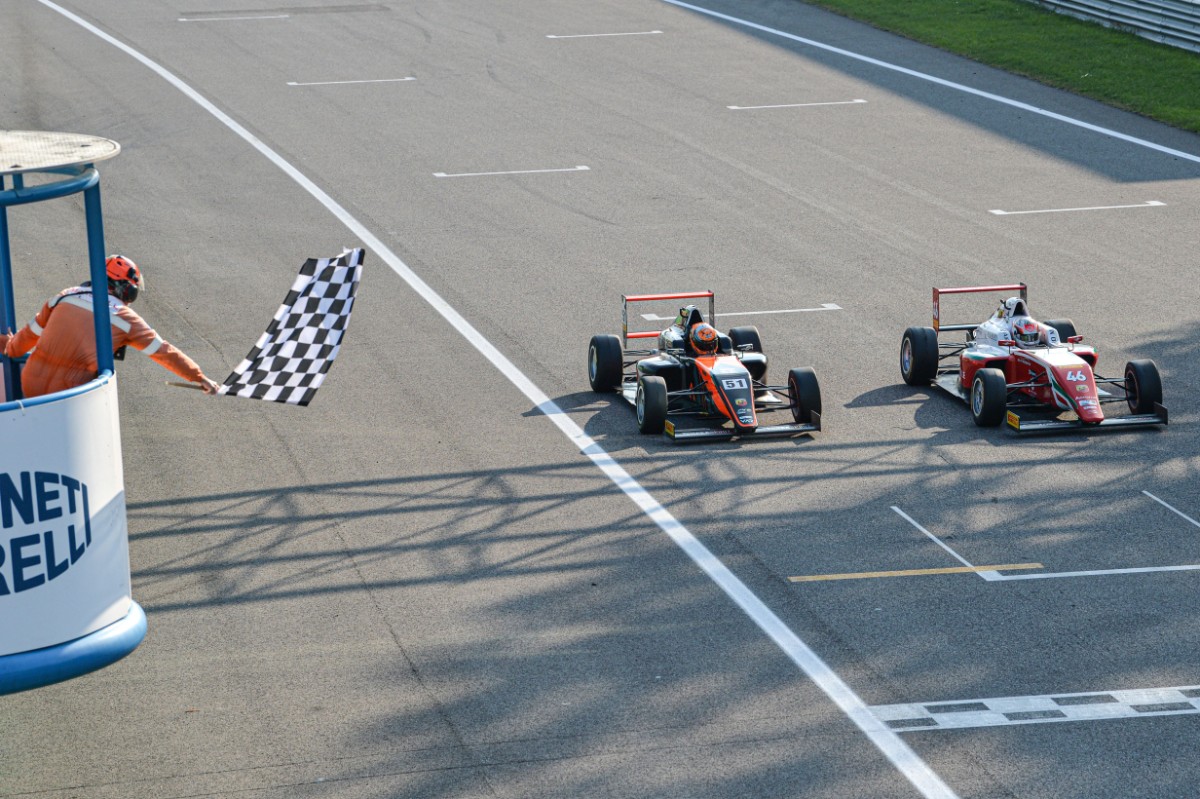 Prema’s Gabriele Mini won out against title rival Francesco Pizzi in a drag race victory in the opening Italian Formula 4 race at Monza.

Mini and Van Amerfoort Racing’s Pizzi were side-by-side as they took the chequered flag at the end of a frantic race, with Mini just nosed ahead to win by just 0.015 seconds.

The result was a fitting finish to a close race, in which the lead changed hands almost every lap. Pizzi started from pole but immediately came under pressure from Mini. As the two battled, Iron Lynx’s Leonardo Fornaroli and Cram Motorsport’s Andrea Rosso closed in on the pair.

The seven-car battle only stopped swapping positions when AKM Motorsport’s Lorenzo Patrese fell off the track, bringing out the safety car.

At this point, Pizzi held the advantage over Mini, Rosso, and Fornaroli, while Beganovic had climbed up to fifth.

The battle resumed almost as soon as the track turned green and Mini dropped back to third behind Rosso before the safety car was brought out again after contact between Pietro Delli Guanti and Beganovic sent BVM Racing’s Guanti off and left Beganovic with a broken front wing.

The safety car period was brief but came late in the race which left one minute remaining when the track went green.

Pizzi initially got a good getaway but it wasn’t enough to break from Mini, who snatched second on the restart.

Mini snatched the victory, extending his lead at the top of the championship order with his first back-to-back win.

The gap between Rosso and fourth placed Ugran was almost as close, just 0.04s seperating them on the line, but Rosso held onto the podium finish.

Fornaroli took fifth ahead of Sebastian Montoya and Bence Valint.

Contact between Salmenautio and Gabriel Bortoleto dropped them both down the order just before the final safety car, denying Bortoleto the chance to continue his string of podiums.

Sebastian Ogaard came through from the back of the grid to finish eighth ahead of Piotr Wisnicki and Santiago Ramos.