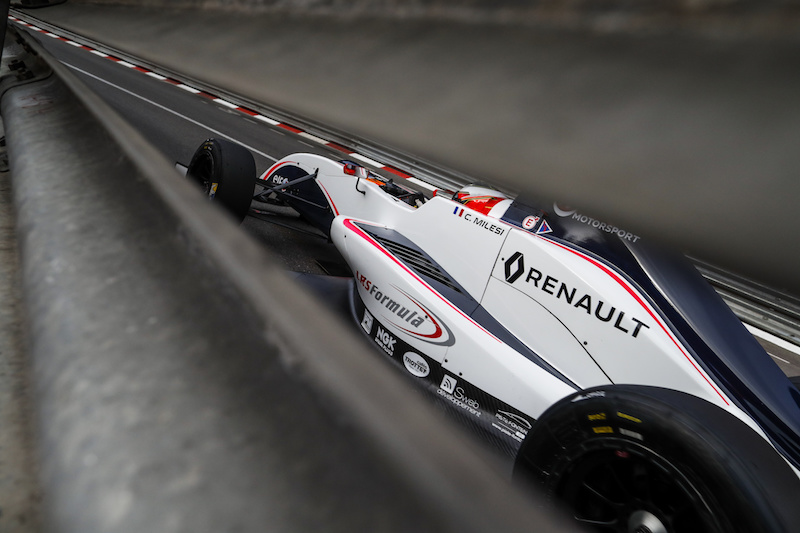 Charles Milesi and Alex Peroni will start this weekend’s Formula Renault Eurocup races in Monaco from the front after topping their respective qualifying groups.

Fresh from his maiden win at Silverstone last weekend, Milesi set the overall quickest time to take pole for race two, to be held on Sunday morning before the Monaco Grand Prix.

The Frenchman ran in the second qualifying group, where he sat fourth behind Max Defourny, Lorenzo Colombo and Yifei Ye halfway through the 30-minute session.

The closing stages were all about Milesi and championship leader Ye however, with Milesi going underneath the group one benchmark of Peroni inside the final 10 minutes.

Josef Kaufmann Racing’s Ye was 0.086s behind R-ace GP’s Milesi, with Colombo nearly a tenth further back in third and a similar gap again back to fourth-placed Defourny. Logan Sargeant completed the top five.

With the fastest time in the slower first group, Peroni will start from pole in race one with Milesi alongside, before the positions are reversed for race two.

The Australian was involved in a very close battle with Renault juniors Victor Martins and Christian Lundgaard.

Practice pace-setter Martins actually hit the barrier at Sainte Devote early in the session and needed a change of front wing, but took top spot inside the final two minutes by just 0.001s over Peroni and 0.003s over Lundgaard.

While Lundgaard stayed third, Red Bull Junior Neil Verhagen edged out Renault’s Max Fewtrell by 0.001s for fourth in the group, leaving title contender Fewtrell with a pair of fifth-row starts for the two races.