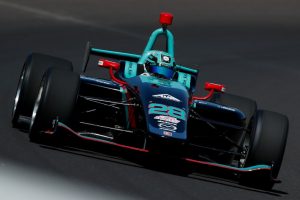 Andretti Autosport’s Dalton Kellett took a surprise pole position for the Freedom 100 at Indianapolis Motor Speedway, the first in his car racing career.

Kellett started his career in region Formula Ford in his home country of Canada in 2013, and has not started from the first position in any of the championships he has competed in since. He currently lies seventh in the Indy Lights standings, last of the full-time driver.

Championship leader and team-mate Patricio O’Ward will line up in second place for his first Freedom 100 start, with his first lap only 0.06 seconds off Kellett. His second lap was actually faster than Kellett’s equivalent, but wasn’t enough to take his fifth pole of the season.

Ryan Norman made it an Andretti 1-2-3 in third, and was almost 1mph slower than his pole-sitting team-mate on average.

Davey Hamilton Jr, son of former IndyCar driver Davey Hamilton, marked his first Indy Lights appearance since 2016 with seventh for Team Pelfrey, who missed the last two rounds of the championship after racing at St. Petersberg with Shelby Blackstock and Neil Alberico.

BAR’s Aaron Telitz was the slowest of the eight drivers, and the 2017 runner-up will have a busy schedule as he makes the seven mile journey to Lucas Oil Raceway to qualify for the Freedom 75 USF2000 race after completing his Indy Lights duties.

Telitz won the USF2000 race for ArmsUp Motorsport in 2014, and has since been working with the team and its current drivers. He does have experience of the current generation USF2000 car as a result of his work with ArmsUp, and will make his return to the lower tier with the team.