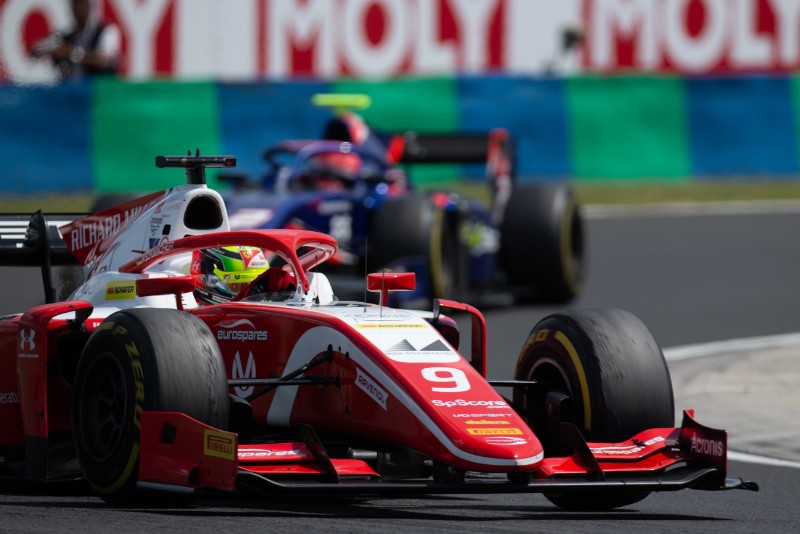 Mick Schumacher has said that he was driving “on the edge” in the final laps of the Formula 2 sprint race win at the Hungaroring.

The 20-year-old led the race from light-to-flag to score his first F2 podium, but he had to withstand heavy pressure throughout from Carlin’s Nobuharu Matsushita.

Matsushita made a great start from second on the grid and almost took the lead from Schumacher, but the Prema driver was able to defend his position, setting up a race-long duel between the pair.

“It feels great to finally take my first win, I can only say that I am really happy, especially after the bad luck we sometimes had since the beginning of the season.” said Schumacher.

“It’s never easy to be out front and I tried my best especially in the last sector, having a good exit to prepare for Turn 1.”

Although overtaking opportunities are limited at the Hungaroring, the long run down the pit straight to Turn 1 and F2’s version of the Drag Reduction System makes it the prime spot for moves.

By pushing in the last sector to ensure Matsushita had a smaller chance of passing at Turn 1, Schumacher had to prioritise looking after his Pirelli tyres through the rest of the lap.

“I tried to push to get out of the DRS zone but I was also trying to look after tyres so that if Matsushita was coming back I would still have had some grip left even if it was a bit on the edge in the last laps.”

Matsushita closed to within half a second on the penultimate lap but Schumacher did enough to cover off a move and went on to win by 1.4s.

With a win finally under his belt, the German driver is glad that he goes into the summer break as a winner and is looking forward to heading to more familiar circuits.

“For the next race, we are going to Spa-Francorchamps, which is a good track for me and where I feel very comfortable.?

“Today’s result will provide a boost going into the summer break but also into the next race, so I’m looking forward to that.”