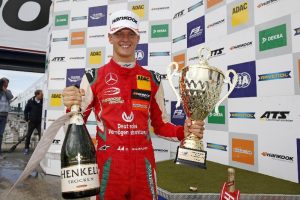 Mick Schumacher has completed a hat-trick of Formula 3 European Championship victories at the Nurburgring, becoming only the sixth driver in the modern era to win all three races in a weekend.

The Prema driver started the race from pole, defending the inside line staunchly from team-mate Robert Shwartzman, and then romped away to a 4.985-second victory.

He is the first driver to score a European F3 hat-trick since Lance Stroll at the end of 2016.

Shwartzman finished second to Schumacher for the third time in a row, and only looked a match to Schumacher when the leader was looking after his tyres. Shwartzman is now sixth in the standings, and is the latest driver to join the ever-changing title battle.

After being bettered by Hitech GP’s Alex Palou on the first lap, Motopark driver Dan Ticktum settled for fourth place, and saw his championship lead over Schumacher cut to three points.

The only noticeable incident of the race was when Van Amersfoort Racing’s Sophia Floersch hit Ameya Vaidyanathan, causing the Carlin driver to take to the pits. Floersch was handed a drive-through penalty for the incident.